I don't pay much attention to Record Store Day releases any more. I'll scan the list to see if anything jumps out at me, but for the most part there is rarely anything that I'll sweat if I don't happen to pick it up. This year there were two items on the list that I wanted to pick up if I happened to come across them...but as it would turn out, I only ended up with one of them, as the Dio single appears to have only been released in Europe. I'm still coming for you Dio...it just may take some time. 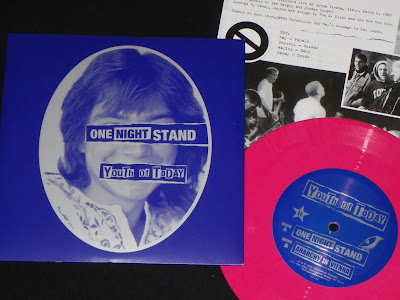 Initially, I thought that the Youth Of Today 7 inch released for Record Store Day was goofy as hell, but that's only because I'd forgotten how much fun this One Night Stand cover is. Originally done by The Partridge Family, Youth Of Today completely make this song their own. Considering that I think it was only available on the REV100 CD, it is cool to finally see the song on vinyl. 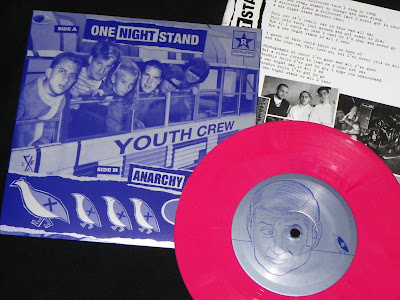 As much as people grumble about how much they hate Record Store Day, it's funny to see the collector nerds scramble when Revelation poops out 6 different pressings of this single. I don't play that game anymore, and since this 7 inch carried a bullshit price tag of $11.00, I'm happy with just this one pressing. Kincaid labels on magenta colored vinyl is limited to 1,000 pressed.