Sacred Reich were a hugely important band for me as a kid. Their first three albums, Ignorance, Surf Nicaragua and The American Way, all left a big impression on me at the time. For people that thought that metal bands only sang about killing your parents and worshiping Satan, they obviously never heard Sacred Reich. 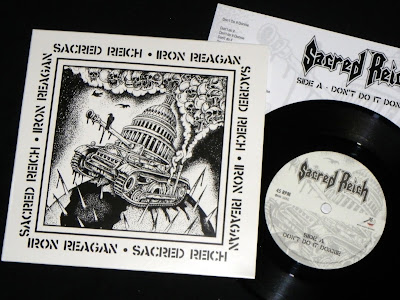 In Trump's America, we need bands like Sacred Reich more than ever...bands that are pissed off and vocal about the shitty things going on right now...so I was stoked to learn that the band was back together and recording a new album that is due out this summer. We get a preview of what's to come with this split with Iron Reagan, and it does not disappoint with this fast and furious attack that leaves me wanting more. Bring on that full length album. 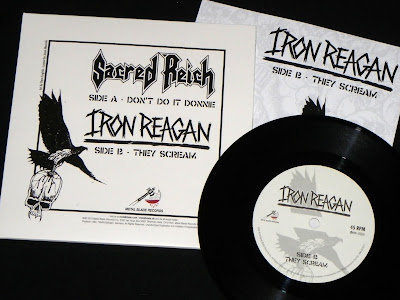 Over on the b-side, Iron Reagan offer up a scorcher as well. The band is the king of split releases, and it cool to see them partner up with Sacred Reich this time around.