I've been running through 2019 with an open mind, and checking out some hair metal bands that I wouldn't go anywhere near back in the 80's. I've been pleasantly surprised, and have discovered a bunch of fun albums...so the trip has totally been worth it. 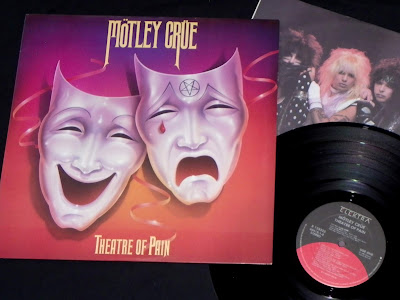 While Motley Crue was one of my favorite bands when I discovered them in 1983, but by the time they released their Theater Of Pain album in '85, I was done with them. I was all about Iron Maiden, Judas Priest and Dio, and when Motley Crue released the video for Home Sweet Home, I figured that the Crue had gone soft and I wrote them off as posers. Given my obsession with hair metal this year, and the release of the Motley Crue movie, The Dirt, I figured that I'd finally give Theater Of Pain a shot...and I'm really glad that I did, because this record is a lot of fun. I mean, it isn't going to stack up next to the first two Crue records, but it is still a good time. 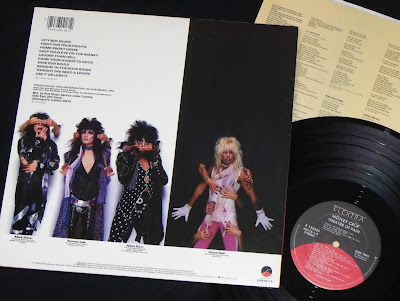 While I was recently flipping through the used bins at a local record store and came across this copy of Theater Of Pain. I didn't feel like spending the money at the time, so I put it back in the bin, and left the store...and then as soon as I got home I regretted it and I couldn't get it out my mind. I thought about that record for the entire week, and the next weekend I found myself back in the city grabbing lunch with my wife. I don't usually drag her along to the record stores, because the less that she knows, the better...but I had to scratch that itch, so I pulled her into the store. The record was still in there, and since she is a big Motley Crue fan, it was an easy sell to convince her that I needed this record.