I've been tuned into the Metal this year, and that includes the new shit as well. When people over on the Braveboard started giving high praise to the new Slough Feg album, my first though was, "What the hell is a Slough Feg"? What a weird fucking name. I would have never given this band a chance, except for a few Metal dudes talking about it as being an Album Of The Year contender. 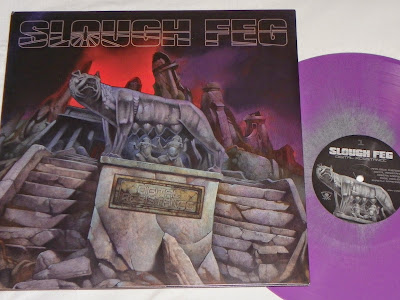 When I first gave the Digital Resistance album a chance, I didn't know what to think. It had this weird Jethro Tull/Queen/Rush vibe...but with a harder Metal edge. What the fuck was this? It didn't fit into my mold of what Metal should sound like, and I wasn't sure that I really liked it...but it was intriguing enough to make me want to check it out again. 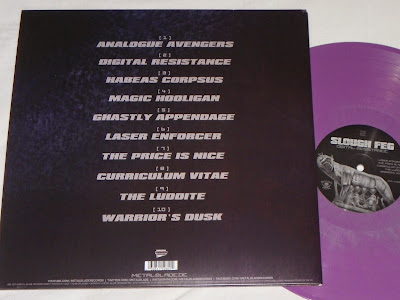 As it was slightly odd and different, it took me a while to get my head around the songs on this album. Now that I'm digging it, I'm really loving this. I can't think of another Metal band that has this sound. Refreshing.

Apparently the band have been around since the mid-90's, at times going under the name The Lord Weird Slough Feg, and Digital Resistance is their ninth studio album, but this is the only album of theirs that I'm familiar with. I can tell that I'm going to have to check out some of their earlier material soon. 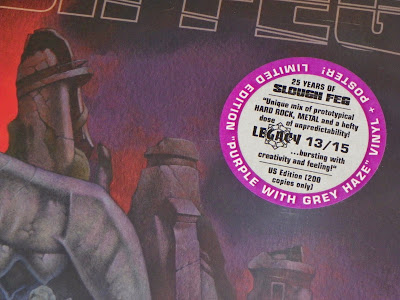 Limited to 200 on purple with gray colored vinyl.

Slough is a town about ten miles from me. It's where the sitcom 'The Office' was based. No idea what a feg is though.

The Lord Weird Slough Feg is a character from the Slaine comics.

There hasn't been a bad Slough Feg album yet. If you're starting out on Digital Resistance you will be blown away by their earlier releases and to see them perform live puts it all into perspective of just how amazing they truly are.

Yes, all their albums are great. Go listen to their space opera Traveller, and while you're at it, listen to the next one, Atavism (which has a great two song section about Odysseus)

Thanks for the comments, guys. I love it when my Metal posts get some attention.

The term "Space Opera" doesn't sound very appealing, but Slough Feg gave me a nice surprise with Digital Resistance, so I'm no longer quick to dismiss.

it's not literally a space opera lol, it's based off an old british comic, a sort of concept album, it's awesome though. down among the deadmen and traveller are my favorites, and i'm a huge feg fan.

True. Earlier albums are even better!

Brilliant band, every album is gold

The name Slough Feg comes from a British comic, as Anonymous says, but the "Traveller" concept comes from the American science fiction role-playing game of that name first published in 1977 and still going strong. Whether that concept appeals or not, it's a splendid album - perhaps their best.