I'm a huge fan of Overkill. I've loved them since 1987, when I first heard Taking Over...plus their last three albums, Immortalis, Ironbound, and The Electric Age, have all been solid gold. Once pre-orders were announced over at Nuclear Blast for the band's newest album, White Devil Armory, I jumped in and placed my order. 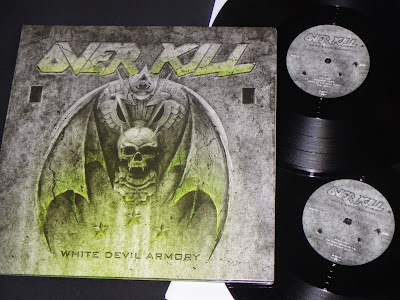 Some time later, when release day rolled around, I was still sitting here waiting for my vinyl to arrive. Weeks pass without my record arriving in the mail, but I figure that it was just your typical delay with vinyl pressing plants. I'm patient, so I don't mind waiting. A few more weeks pass, and now I'm starting to get a little anxious. I know that this shit happens all the time with smaller Hardcore labels, but I wouldn't expect this from a big time label like Nuclear Blast. Out of curiosity, I start scanning through my paypal emails, looking to see when I might have placed the order. I'm stumped. I can't find my email receipt anywhere.

Turns out, I apparently hadn't ordered it as I'd thought. I clearly remember looking at it in the Nuclear Blast store, but I must not have pulled the trigger at that time. Damn. Am I buying that many records, that I can't keep straight what I've ordered and what I haven't? Hashtag record collector problems.

Heading back to the store, the original press on clear vinyl with green splatter had sold out, leaving me with only a black vinyl option. I suppose that I could have hunted down more limited color vinyl options by buying overseas, but, black vinyl works just fine. 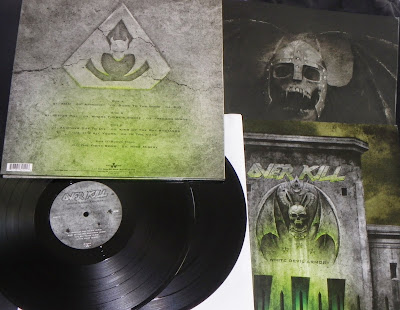 The album itself is good. It sounds like an Overkill record, but the first couple of listens left me a little underwhelmed, and didn't seem as strong as the previous albums. I've listened to it a few times since I've received it, and it has grown on me, and I'm enjoying it more and more, as I become more familiar with the songs. Incredible to think that it has been 31 years since Overkill's first demo tape, and with 17 studio albums under their belts, they still keep thrashing out strong material.