Four years ago, Accept was revived from the dead with a brand new singer. I would have thought that Udo was irreplaceable, but goddamn, when Blood Of The Nations was released in 2010, it shocked the hell out of me, and made it near the top of my Best Of list for the year. Same thing with the Stalingrad album two years later. Man, Accept were on fire! 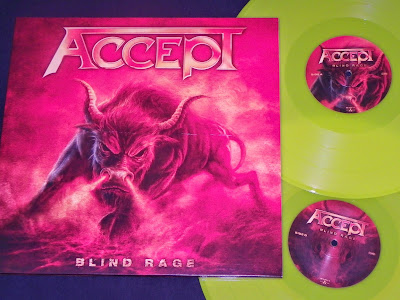 For the the two new reunion albums, I opted for the cheap and convenient format and bought the CD. With the new release of Blind Rage on the way, I wasn't going to make the same mistake again. This time it had to be vinyl.

With the release of the first single, Stampede, I was psyched. The song is full on attack mode...fast, furious and heavy...and I eagerly awaited the release of the album. Unfortunately, compared to Blood Of The Nations and Stalingrad...as well as the Stampede single...the album falls a bit short for me. It is still good, but there are a string of slower songs that kind of bring the whole thing down a bit. Not bad by any means, but not as good as I'd hoped. 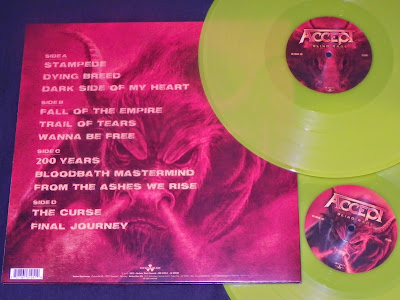 Limited to 300 on yellow vinyl for the US pressing.