A couple weeks ago, I posted the results of my downtown shopping spree at Electric Buddahs. While I was in there I noticed that the store had a small New Wave/Punk section. For the most part, this section was heavy on the New Wave, and not stuff that I was interested in. However, this Attitude Adjustment record was hidden in there, and caught my eye. At the time, I was short on time and money, so I figured that I was safe leaving the record until my next visit...I mean what were the chances that someone else in Portland, Maine was going to stumble upon and be interested in this gem? 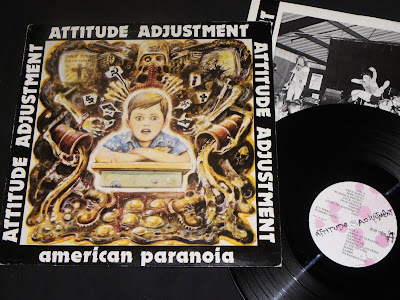 I'd been itching to get back to the stores, so after a week or so had passed, I'd convinced my friend Jeff to join me on another record shopping spree. First stop was to grab that Attitude Adjustment LP. There it was, right where I'd left it. 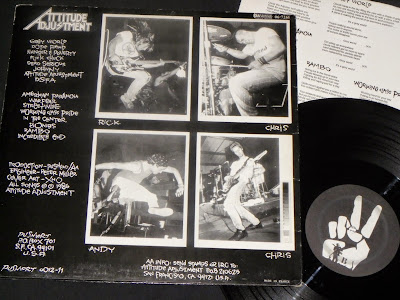 This is my first Pusmort Records purchase, and while I'd grown up with Pushead designed Metallica shirts and singles, it is pretty cool to see that lettering on the back of the album cover. Damn, these songs are so good. I'd never heard this album back in the day, and never really checked them out until a couple years ago, but this shit is reminiscent of stuff like Cryptic Slaughter, or early D.R.I.. Had I heard this back in '86/'87, there is no doubt that I would have eaten this shit up.

That is such a fucking good record.