You Wanted The Best, And You've Got It

I fight tooth and nail against live albums. I find the majority of them to be to be a waste of time. Why listen to a live album and only get select songs, when you can just throw on the studio album and enjoy the deeper cuts as well? 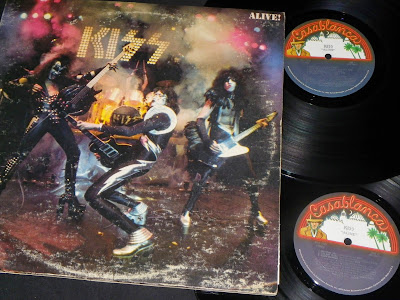 My friend, Jeff, is a big 70's head, and he's been trying to force feed me some live albums lately. He has a handful that he lives and dies by...and the two that he has been pushing hard have been Deep Purple's Made In Japan and Kiss' Alive!. I've done a pretty good job of ignoring him for the past six months or so, but the last time I was over at his house, he handed me a copy of Alive!. He had a few different copies, with various stages of wear and tear, and decided to part with one of them if it meant that I would finally listen to it.

The copy he gave me has more ring wear than I am comfortable with, but it does have the first press, blue Casablanca labels...and the insert booklet is in great shape...plus it was free, so who am I to complain. 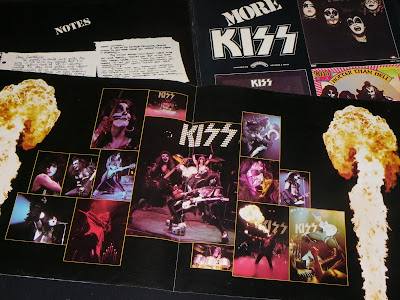 I gave it my first listen earlier this week, and I was completely taken by surprise with how much I am loving this. You hear about how live albums are supposed to capture the energy and intensity of a band, and Alive! absolutely embodies that. The band sound like they are having a blast, partying it up with the crowd. Honestly...I'm stunned. I've listened to this record every day since I've first heard it, and have to say that this may be the best live rock record...ever.