Getting The Led Out

If you aren't familiar with the story, if I had to categorize Led Zeppelin as a kid, they would fall under the heading of "Who Gives A Fuck". Regardless of the loud guitars and screaming vocals, all my teenage ears heard was Stairway To Heaven, and for that, I could not have cared less. I guess it is one of the beautiful things of being an angst ridden kid that is discovering a world of Heavy Metal and Thrash. I was in love, and if a band fell outside of that immediate circle, it was shit, and not worth my time.

And if that closed minded arrogance defines youth, one of the wonderful qualities of growing older is that you tend to break down some of those walls, and you reach out and start to appreciate some of those things that you'd shut out while growing up. Such was my relationship with Led Zeppelin. 20 years is a long time to chill out and recognize that music doesn't have to hit you in the face like a hammer 24 hours a day, and to acknowledge that power doesn't only mean blazing fast guitar leads. It took me a while, but once I recognized these facts, and a friend introduced me to Achilles Last Stand from the Presence LP...I had to pick my jaw up from the floor. Goddamn. I've been denying myself some amazing music.

So, while I've come to appreciate Led Zeppelin over the past 8 years or so, when the new remastered pressing were scheduled to come out this year, I wasn't really sure what level of a fan I really was. While the Super Deluxe box sets looked amazing, I wasn't sure if I wanted to commit at that level. Yeah, I was a fan, but was I a "$100 record" kind of fan? You can see from this post, the answer to that question. 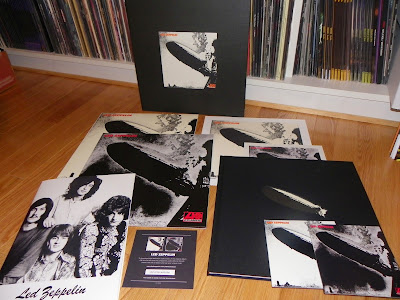 I was really torn on making the big leap, knowing in the back of my head that I wouldn't be able to stop at just one. No, once I started the madness, I would have to see it through for the entire discography.

On release day, I took a trip to the local record store...you know, just to check them out. I walked through the door, and only Led Zeppelin II and III on display. I picked up one of them from the shelf...fuck...they felt so heavy...so substantial...the hook was set. As I was looking over the box, a salesman walked up and asked I was finding everything okay. Well, if I was going to buy one, I was going to start with Led Zeppelin I, and since there weren't any on the shelf, I asked if they had any in stock. He went out back, and 5 minutes later he was back with a copy in his hands. Now I felt that it was just rude to not buy it after he took the time to find a copy for me...like it or not, I was committed.

Cracking open the box, I was immediately happy that I spent the money. Vinyl...hardcover book...art print...a replica of the press kit from Atlantic...holy shit, this thing was well put together. 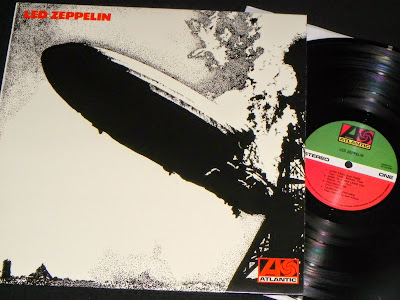 I've always liked the first Zeppelin album, but by the time I would get to the end of the album, I would often find that it had lost my attention. With this remastered vinyl, that was not the case. The recording sounds incredible, and sucked me in from start to finish. 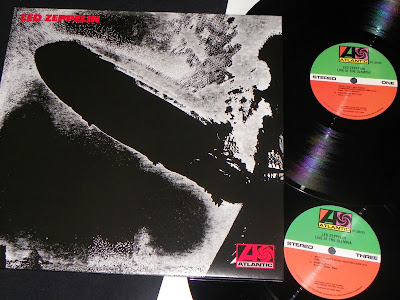 The bonus LP contains a live show from the Olympia in 1969. I've never been too interested in Zeppelin live material, as stretching the songs out with some trippy jam session has never been my style...and this companion LP is not exception. Good for a historical reference, but not something that I'll be reaching for very often. Still, that "negative image" style album cover is totally bad ass. 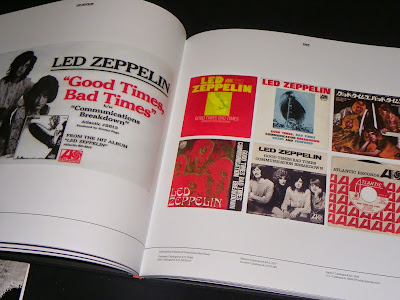 The hardcover book is a great addition to the overall package. I love flipping through it, looking at the old photos and news clippings. Seeing all of the different variations to the 7 inch singles, it tugs at the collector in me, and says, "You want them, don't you?". 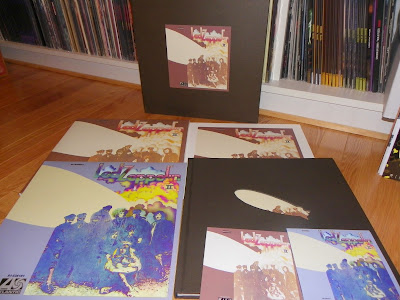 Once I'd bought Zeppelin I, it took me a couple of months to work up the courage to start thinking about buying II. Dropping this much money on a box set is not for the faint of heart. I'd promised myself to not half ass this collection, and once I got myself in a good place financially, I finally committed to buying the second box set in the series. 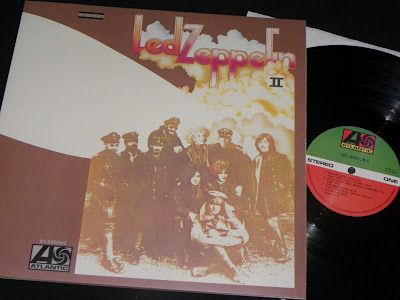 I'm always torn as to what my favorite Zeppelin album is, and I waver from one to another. Well, after just giving II a listen with this box set, I'd say that this one takes the top spot. Damn, this this is so solid. 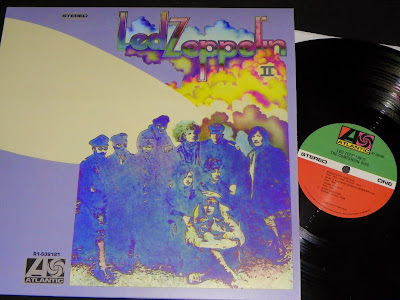 I'm not big on outtakes and alternate recordings, and that is all we get on the companion LP with this set. It is an interesting listen, but not something that I'd reach for very often. Love the look of that psychedelic album cover though. 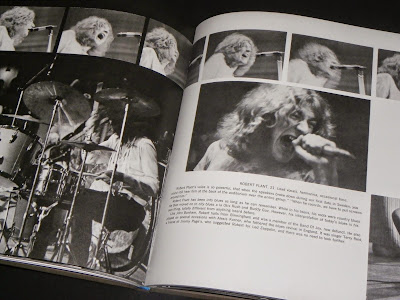 This box set didn't come with as many extras as the first one, but still that hardcover book is well worth the price of admission. I love looking at these old pictures of Robert Plant singing...the dude did not hold back, and just put everything into unleashing on the mic. 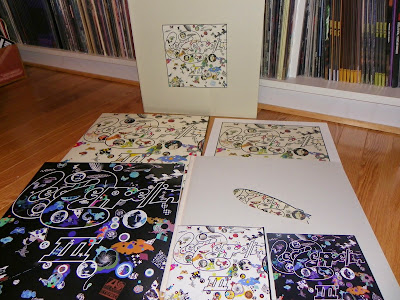 I bought the Led Zeppelin III box shortly after buying II. Finding a used copy for sale at a discounted price helped to sway my decision to buy it, rather than waiting another couple months. Who buys something as hefty as one of these box sets, only to turn around and sell it back to the store so soon after? 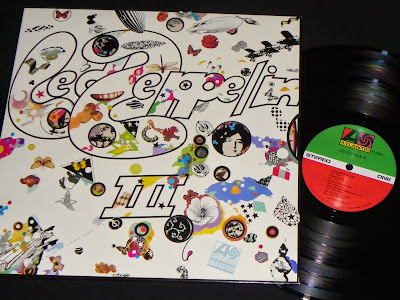 When I first started checking out the band, it took me a long time to warm up to Led Zeppelin III...there just weren't enough loud and heavy guitars. Sure it started balls out with Immigrant Song, but there was too much acoustic guitar for me to really appreciate it. Sitting here today, on this nice summer day, with the sun pouring in the windows, I'm thinking that songs like Tangerine and That's The Way are as close to perfection that a band can get. Beautiful. 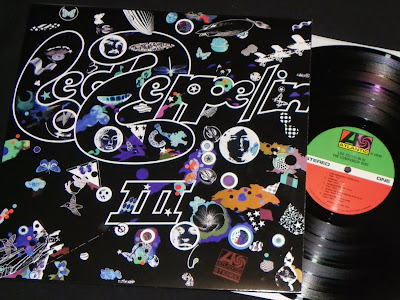 More outtakes for the Zeppelin III companion album, although the Jennings Farm Blues song is a cool mix of all the guitar overdubs from the days recording session, as is the Key To The Highway/Trouble In Mind song that I'd never heard before. 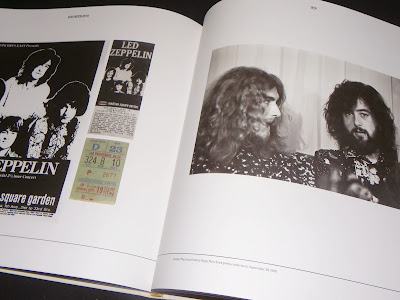 Looking at the pictures in the hardcover book for the Led Zeppelin III box set...these photos make me want to grow a beard. 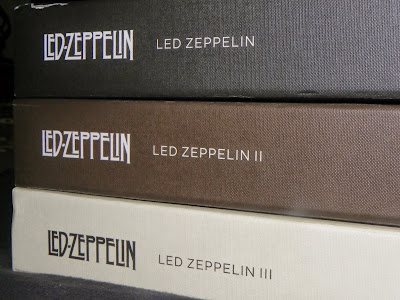 I, II, and III complete. Looking forward to IV and Houses Of The Holy this Fall.

I've tried to get into Led Zep a couple of times in the past. To date I have failed. I do, however, love my Coalesce Led Zeppelin covers 12" which includes 'That's The Way'.

Myself on the other hand, could never get into Coalesce. However, if Zeppelin did a Coalesce covers record, I bet I'd be all over it. in fact, now that I've mentioned it, this really needs to happen.

Nice posts--I'm in the same Led Zeppelin boat you are...they bored the hell out of me when I was younger but I've been binge listening to these reissues for 2 months. I'm not so stoked on IV but Houses of the Holy is gonna be awesome

I for one, have been into Zeppelin since I was 12 years old! I loved Stairway to Heaven (especially the end), Rock and Roll, Black Dog, Immigrant Song, Kashmir, Heartbreakeer, Communication Breakdown, In the Light, etc. My grade 8 school photo has me sporting a Led Zeppelin 3/4 length sleeve black and white t-shirt.
I own all the original Atlantic and Swan Song Canadian pressings, own all the dvds and movies and still - I won't buy these monster deluxe copies!

Good job Mike. I am so proud of you.

And yes, Tangerine rules. It isn't the close out song of Almost Famous for nothing.

Led Zeppelin, the best band EVER!!!! Saw them in 77', Los Angeles Forum, amazing!