...And Justice For Me

26 years ago this week, Metallica released their fourth full length LP, ...And Justice For All. While at college during the Fall of '88, I felt like more of an outcast than I did in High School. I didn't know anyone, and in between classes, I would just retreat to my car, and sit there listening to music. Metallica had just released this new album, and I have clear recollections of sitting there listening to it again and again. 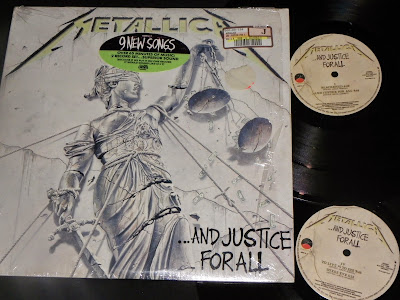 While Metallica were becoming more popular at the time, Metal was still a dirty word, and most people still didn't "get it". The band were still ugly and loud, and with 7 of the 9 songs clocking in over 6 minutes, you could tell that they were just interested in doing their own thing. While I enjoy all of the Metallica records, I've always considered AJFA to be the last great Metallica album. Still, I've generally overlooked it for the past 10 years or so. Hell, Load, Reload and St. Anger have more seen more action on my stereo than this one. Crazy...I know. 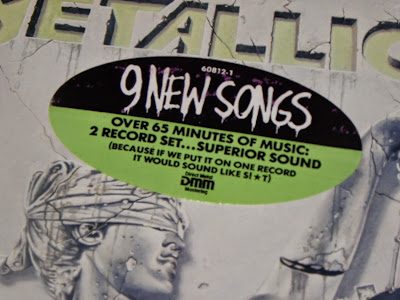 Listening to it now, I'm not sure why I spent such a long period ignoring this album. Frayed Ends Of Sanity, Harvester Of Sorrow, Dyers Eve, The Shortest Straw...damn, I'd forgotten how great these songs are. 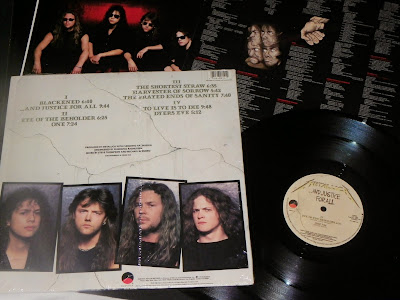 I was recently talking with Mike Puffer from Alert/Through These Eyes, and he mentioned that he was looking to sell off some of his Metal records. Strangely enough, while he is more focused on Hardcore, and getting rid of his Metal vinyl, I'm in the exact opposite position. All Metal...all of the time.

While he didn't have the original Megaforce silver label pressings for the first two Metallica records, he did mention that he had a near mint copy of ...And Justice For All. He gave me a price that was more than fair, so I took the opportunity to finally add it to my collection.

I'd agree completely with this being the last great metallica record

Hmm...to me Metallica died with Cliff Burton. Although this isn't as bad as their later stuff it was still a drop in quality from their first three album and indicated that the band were outgrowing their thrash metal. I always hated the production. 'Blackened' is a banger but it's downhill from there. I actually even prefer the black album to this.
I remember going to see them on this album's tour in 1988 and waiting outside the venue all day in hope of getting an autograph (as you did when you were 16)and when the band finally showed, they looked incredibly pissed off and marched past everyone and went straight inside. They were damn good live though and Danzig supported.