Six years ago, Judas Priest released their second album since reuniting with Halford. It was kind of like the release of Turbo all over again...I remember being really excited for it, and then immediately disappointed. Unlike the synthesized poppy hooks of Turbo, Nostradamus was just long, drawn out, and dull. Instead of making a 23 track, hour and forty minute long album, it was in desperate need of having the fat trimmed.

When it was announced that the new Priest album, Redeemer of Souls, was to be 18 songs long, I figured that the band hadn't learned anything from the past. I was prepared for disappointment. 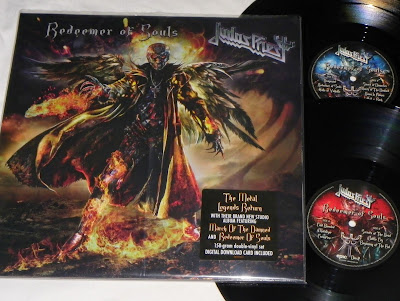 When I checked the title track that was released as a single, I was underwhelmed. Halford's voice sounded weak, and the song sounded thin. I knew that I'd still end up buying it, just because it was Priest, but I wasn't expecting anything too exciting. Things looked a little better with the preview of Halls Of Valhalla, and the guitar solo just ripped. Okay...maybe I was starting to look forward to the album a little bit. 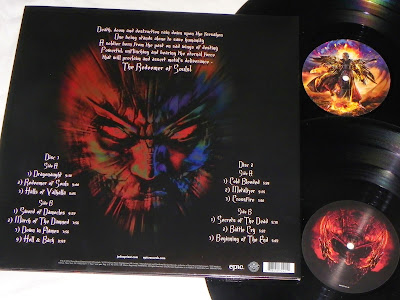 On release day, I found myself at the record store, and digging through the Metal section in the vinyl bins...just to grab the new Priest album.

I really wasn't too impressed after the first listen. Just as I'd thought after previewing the title track a month earlier...meh...it sounds thin and weak. Still, I wasn't going to give up that easily, and after spinning the album for consecutive days, the songs start to sink in. With each listen, I find another song that stands out, and surprisingly enough, I find that I really like this album. Solid Priest. Solid slab of metal. 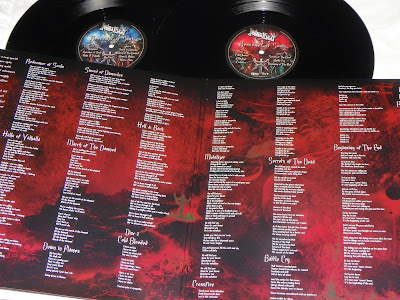 Just to note, the vinyl only contains 13 of the 18 songs...as 5 of the songs are included in the deluxe version of the CD as a bonus...similar to what Sabbath did last year with their 13 album. At present time, I still haven't heard these bonus songs, as I've just been taking my time, and letting the original album sink in.

The packaging for this album is great, with the sleeve getting a nice metallic shine to enhance the artwork. Quality.