Okay...after posting three of the records that I picked up from Grave Mistake this month, I guess it is time to post the one record that drove me to the webstore in the first place. The Magic Circle 7 inch... 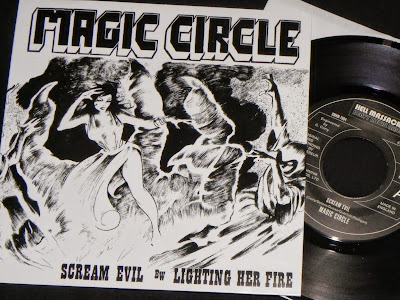 Within minutes of ordering the new Step Forward and Violent Reaction records from Painkiller, Marcus tipped me off that the new pressing of the first Magic Circle was available as well. I'd missed it, and I couldn't be bothered to go back and buy one. I just let it go.

A month later, I saw that Grave Mistake had some in their webstore, and I finally made my move. The funny thing is that missing out on this record with Painkiller paid off, as I now have a copy, yet my Painkiller order has not arrived yet. 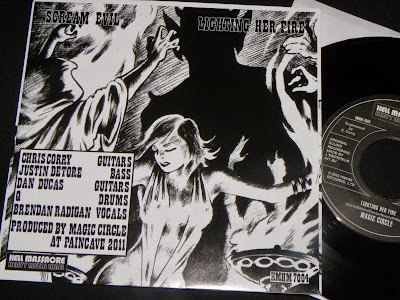 So this is the Scream Evil 7 inch that the band released prior to last year's full length. You know, because Boston bands featuring Brendan Radigan, Chris Corry, and DFJ, tend to suffer from lack of attention and need all the extra hype they can get. Wink wink. The promo obviously did what it was supposed to do, as the LP sold out quickly, and the label struggled for a while to keep it in stock.

The original pressing was limited to 200, and became quite difficult to acquire. This second pressing is limited to 500, and comes with a proper sleeve. The flipside of Scream Evil features a non-LP track, Lighting Her Fire. Man, this song is so good. I'll be spinning this, along with the Stone Dagger 7 inch, on repeat for weeks now.

Annoyingly, I don't have mine from PKR yet either. Even when I'm ahead of the crowd, I still seem to come last.

As far as I know, the Step Forward records haven't been pressed yet. Delays, and whatever.