Since I've been riding high on all things Mos Generator and Stone Axe, I recently decided to "like" them on Facebook. As I was scrolling through the Mos Generator page, I noticed that the band had recently announced that they were going to be takinging some songs from their demo recording sessions, and release them on vinyl in very limited quantity. The numbers were so limited, in fact, that it was sold out by the time I saw that the band was going to press them. I commented that I was disappointed to have missed out on it, and hoped to get in on it the next time they decided to do something cool like this.

Shortly after my comment, I received a friend request from Tony Reed, the guitarist and singer for Mos Generator. I tried not to get too fanboy-ish, and just politely accepted the request, assuming that he had just added me as a friend so that his wall, promoting Mos Generator, Stone Axe, and the various other stuff he does, like his killer Pentagram covers, would be included in my news feed. That was cool with me.

A couple weeks later, I received a private message on FB from Tony, telling me that if I wanted a copy of that limited press demo LP, that he had a few left, and I could buy one if I wanted. I was stoked to say the least. I accepted the offer, and took the opportunity to let the man know just how much I liked the new Electric Mountain Majesty album, and sent him a link to my blog post. He wrote me right back, thanking me for the kind words and that he liked my blog. We then spent some time exchanging pictures of our record rooms, and talking about music, including his jukebox loaded up with Sabbath, Thin Lizzy, Black Flag and Misfits. Turns out, the guy not only writes some killer rock riffs, but also digs hardcore...including a stint where he played with dudes from ALL in a band called Goodbye Harry. The guy just loves music, and enjoys talking it with anyone that obsesses about it as much as he does. Such a great, down to earth dude. 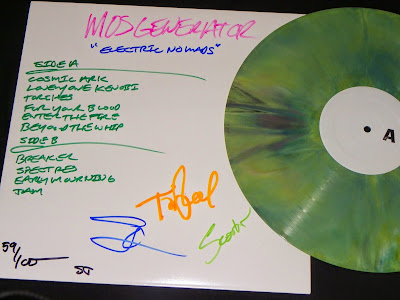 So the object of this release was to just make it a fun project for the band. The songs would be pressed on random colored vinyl, with blank labels and covers. 33 copies would then be distributed to each member of the band, for them to write all the info on the jacket. Then everything is finished off with all the guys in the band adding their signatures. 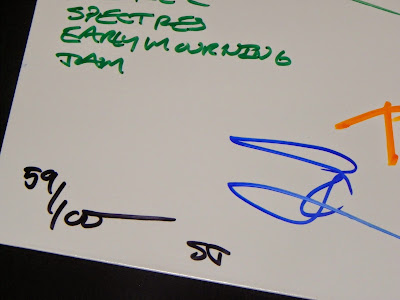 Number 59 out of 100, and initialed by the drummer, Shawn Johnson, as he was the one handled the writing duties for this copy. Job well done. I love the personal touch on this release, and it truly makes this a special collectors item. 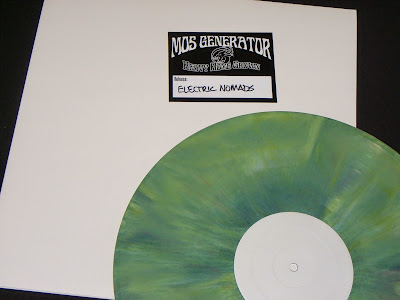 The songs themselves came from the demo sessions from both the Nomads and Electric Mountain Majesty albums, so the Electric Nomads title is fitting. 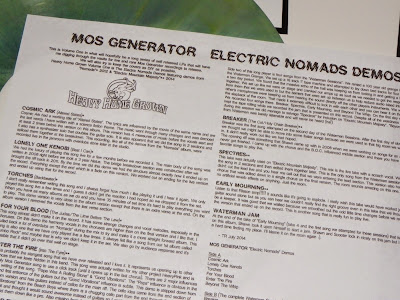 While I'm not typically a huge fan of outtakes and demo tracks when compared to the finished album recordings, I'm really digging these for some reason. Maybe it is due to the additional insert that explains the background for each song. These stories somehow personalize the songs, and the insight makes me appreciate them more. 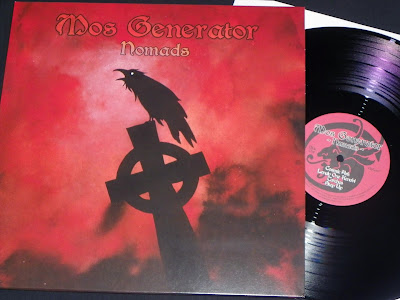 While I was ordering the Electric Nomads LP, I figured that it was a good time to grab the Nomads LP as well. 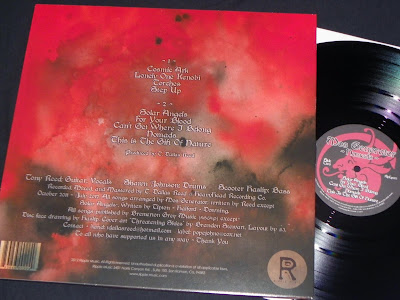 Released in 2012, Nomads stands as strong as the newer Electric Mountain Majesty. The songs...that guitar sound....goddamn, this is so good. I love this album, but one of the highlights for me has to be the bands cover of Judas Priest's Solar Angels. Holy fuck. It is quite possible that the cover is better than the original...or maybe I just think it is better because Point Of Entry can be a bit of a stinker. Either way, the Mos Generator version puts a huge smile on my face whenever I hear it, as it captures the love that this band has for Metal and Rock music. This love and passion for the music shines through, and is one of the reasons that I've come to appreciate everything that Tony Reed touches.

I've never heard this band, but based on that awesome story and the coolness of what they did with that record in general, I am inclined to check them out and support them. But I love the Point of Entry record. Otherwise, awesome post. Ha.

Point of Entry has some great songs on it, no doubt. Heading Out To The Highway, Desert Plains, and Solar Angels...but whenever I think of that album, the first thing that pops into my head is You Say Yes, and I cringe.