When I was picking up the vinyl pressing of the Onward album recently, it got me thinking about another album that was originally only released on CD, but was finally getting pressed to wax...Value Driven, from Better Than A Thousand. 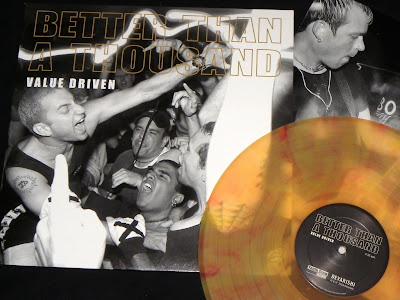 While vinyl might have been left for dead in the mainstream music business when Value Driven was originally released in 1998, it was still odd for hardcore bands to abandon the format at that time. Not that it mattered to me back then, because I was a fool and following that CD trend...but still...it seems strange to look back and think that there was a time when bands and label thought that only a CD option was fine.

Also odd was the fact that it took almost 20 years for this album to finally get the vinyl treatment. With so many records getting reissued and repressed with ten different colored vinyl options, I'm surprised it has taken this long for Value Driven to finally get pressed. 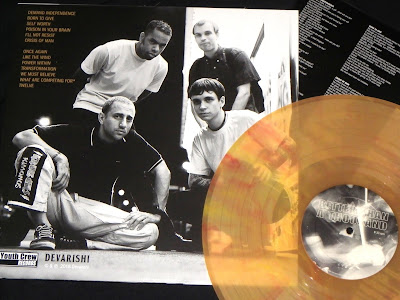 Man, I was excited for this record in 1998. The Youth Crew revival was in full swing, and at the time I thought that Value Driven was a lot better then the Just One debut. Back then, I felt like this record was on par with those classic Youth Of Today records...these days, it has lost something over the years, and doesn't feel nearly as potent. Still, it has been fun to revisit this one, and it is cool to finally get a vinyl pressing.

Labels: Better Than A Thousand

I really enjoyed listening to Value Driven again. I remember it was easier to find this cd than the previous one on Revelation here in the Netherlands. Probably it was released by Epitaph. There was however a Japan only pressing of the LP, I never pulled the trigger to get a copy.

I'm pretty sure I didn't dream owning three different versions of a Japanese vinyl pressing of this for for close to 20 years now.

Shit. You are right. I'd forgotten all about that Japanese pressing...because, well, who the hell only does a pressing from Japan?