I've been hot to check out newer hardcore bands lately. The feeling seems to rise and fall, but right now we are definitely riding the crest of that wave, as I'm eager to check out anything that might be interesting in hardcore. Back when I was buying record after record from Triple B, and I was trying to find something new outside of that label, I remembered the Berthold City name and decided to finally check them out as well. 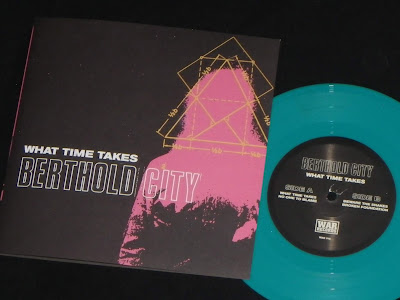 I'd heard the Berthold City name thrown around last year, with the release of their debut seven inch, but I wasn't being sucked into the hype. Yeah, one of the straight edge dudes from Strife was in the band, but it wasn't enough to capture my attention. At that time, I just didn't care enough.

Fast forward to now, and I'm on the hunt, so start to look into Berthold City to see if maybe it was something I was missing out on. I discovered that they released their second seven inch this year, so I dive in to check it out. 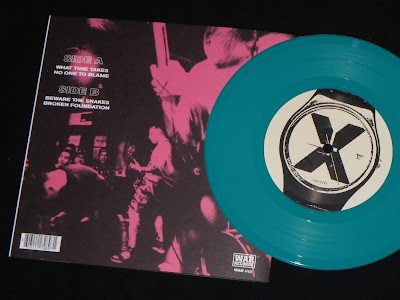 Hey now...this is some good stuff that makes me think of stuff like Betrayed. I don't know why I'm so surprised over how good this is, but damn, I immediately hit up War Records to buy some records.

I was late to the game, and missed the more limited gold vinyl, so I had to settle for the teal vinyl pressing that is limited to 400. 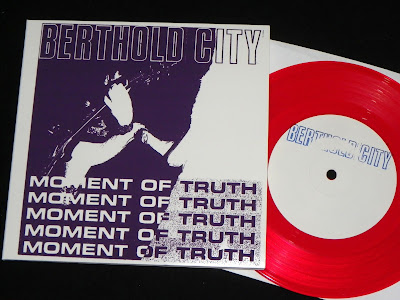 While I was picking up the new seven inch, What Time Takes, I was hoping to scoop the first record, Moment Of Truth, as well. War Records was on their second pressing for this one, but they still had some limited red vinyl with a silk screened cover available in the store. 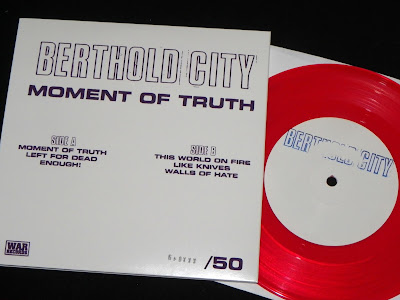 I'm not sure what the deal is for these screened covers. I don't know if they were left over from some other project, but the label had both purple and black screened covers available, and since they were limited to 50 each, I paid a few extra dollars to get one of them, instead of the standard second pressing. 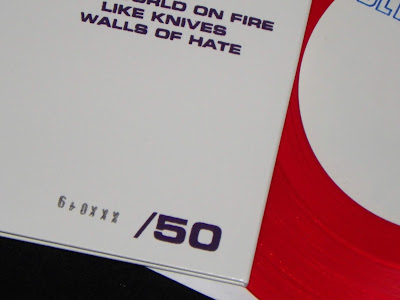