When I'm buying records from overseas sellers, before I check out, I'll check to see what else they may have available...and this usually pays off when I'm looking for NWOBHM stuff. When I was picking up the Iron Maiden single for Running Free, I quickly checked the sellers list, and was happy to add a couple of cheap singles to the cart. 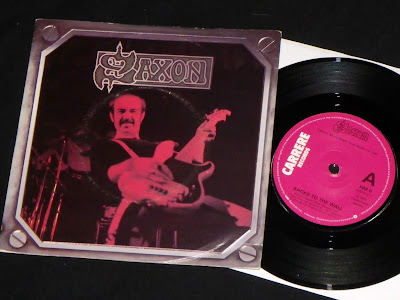 When it comes to Saxon, it seems that most people tend to overlook their debut self-titled album. It is understandable, and the band didn't really hit their stride until their follow up, Wheels Of Steel. Still that debut is a solid rocker, and I was happy to grab a couple of early singles from that record.

I love that live shot of Steve Dawson on the front of the Backs To The Wall/Militia Guard single. 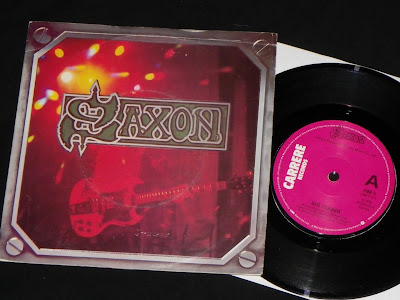 The Saxon logo kind of obscures what is going on in the cover photo for the Big Teaser/Frozen Rainbow single, but it's still a nice one to own, since this is the only pressing for the single that came with a picture sleeve. 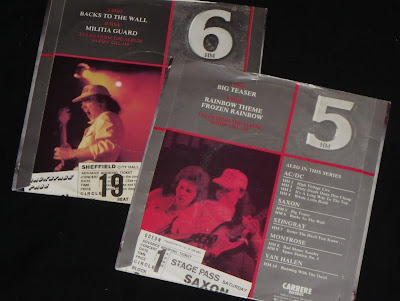 These two Saxon singles were part of the Heavy Metal series from Carrere Records. They don't offer anything new, but I really like the look of these, and would love to get the rest of them. AC/DC, Montrose, Van Halen....and Stingray!?!? No idea who Stingray is, but they ended up in some good company.