A friend of mine wanted visit The Record Connection, a record store that he used to frequent as a kid, 35 years ago. He had some fond memories, and recalled that it was great store back in the day, and so I agreed to make the 70 minute drive up the coast to check it out. The store was in a small Maine town, years from Todd's teen memories, and I really wasn't holding out much hope, but within a couple of minutes of browsing the store, I had pulled an Accept album from the shelf and things were looking up. 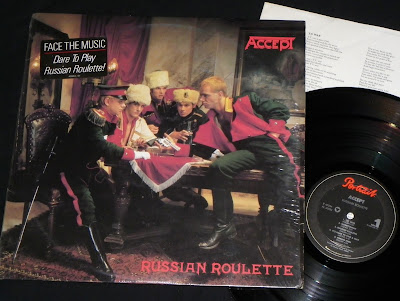 Russian Roulette was released back in 1986, but here we are, over thirty years later and I'm still not very familiar with the record. Metal Heart, from '85 was my introduction to Accept, and I loved it...then I worked my way back through their catalog with Balls To the Wall and Restless And Wild, and that shit just melted my face. Goddamn. I thought that three album stretch was damn near perfect.

By the time we got to '86, I was really getting into Metallica, Slayer and Megadeth, and I had the taste for thrash. I heard a number of disappointing reviews for Russian Roulette, and I decided to just ignore the album. I had limited resources and Master of Puppets and Peace Sells were winning in the fight for my attention. 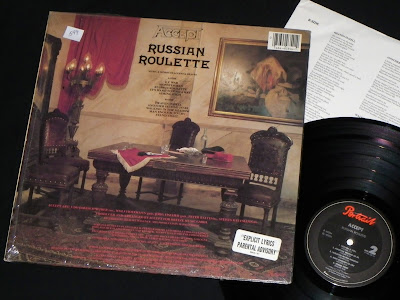 I've heard the album a couple of times since getting back into metal, but I never really felt compelled to return to it very often. It is a decent album, and there are a handful of really great songs here, but overall it is just kind of flat, and I can understand the disappointment surrounding the record back in '86. I'm happy to pick up the vinyl, and I'm looking forward to giving it a few spins with hopes that I warm up to it a bit more.