Rage Against The Evil Empire

Throughout the 90's, I was a big fan of Rage Against The Machine. Their politics and aggression completely fed into my angry young man attitude. I don't really listen to them very much these days, but every once in a while, I'll still give those albums a spin and get such a charge out of it, that I'll toy with the idea of chasing down the vinyl pressing to add it to the record collection. 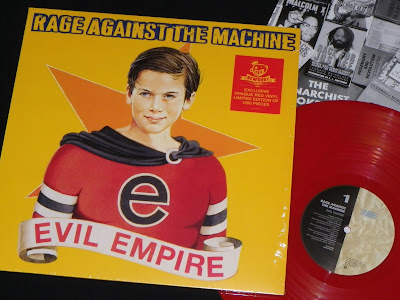 Last October, I met Sandwell in Boston for some record shopping. I haven't been a fan of Newbury Comics for years, but he wanted to stop in and check it out. While we were in there, he mentioned he was looking for a Newbury Comics exclusive pressing of an Op Ivy record...two seconds later, I started looking around to see what other exclusive colored vinyl pressings Newbury Comics had available. When I saw the red vinyl for Rage Against The Machine's Evil Empire album, I was tempted to finally grab a copy...then I saw the price tag, and immediately put it back on the shelf. Yeah, I wanted a copy, but money was feeling tight, and I didn't want to drop $30 on one. 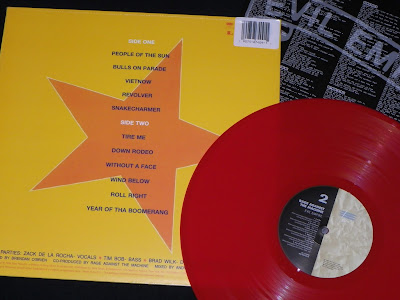 While I didn't want to buy one for myself, I was totally okay if someone else wanted to buy it for me, so a month later, when my brother asked me what I wanted for Christmas, I pointed him in the direction of the Newbury Comics exclusive vinyl in their online store.

Labels: Rage Against The Machine

I loved the first RATM album, but never heard anything since. Well, aside from the 10" on Rev of course.