One of my prouder blogging moments was my string of "Dio-cember" posts last year, where I filled a couple major holes in the collection, and picked up a few oddball promo records. That string of records was so much fun to chase, and taking the group photo of my Dio collection laid out on display felt like a major accomplishment...even though it was still incomplete.

I was only missing a few big ticket records from the Dio collection...Strange Highways, Magica, and Heaven & Hell Live From Radio City Music Hall. There are a few others that I need, like some early singles, but those three command higher price tags...and it feels great to cross one of them off the list. 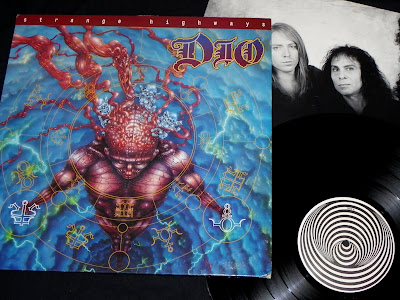 Some people only hang with Dio through the Sacred Heart album, or maybe stick it out through Dream Evil from 1987...I know that was my position for the longest time...but you are missing out if you are still stuck in that mindset. Dio had some amazing albums when metal started to fall apart in the 90's, and Strange Highways is one of my favorites. 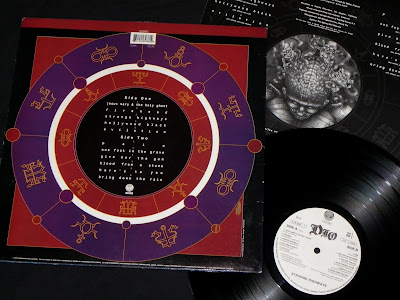 1993 was not a friendly time for vinyl, and many record companies were only releasing CDs, so Strange Highways only saw a European release on wax...therefore, it can cost you some good money to get your hands on a copy. Although, after I picked up this copy, there was a reissue campaign for Dio's catalog from Holy Diver through Strange Highways, so maybe that will drive the price down for the original pressings. Either way, I'm just happy to finally own a first press for this.