It has been a few years since I've been sucked into buying multiple copies of a record. That game kind of got played out for me, and it stopped being fun to chase different colored vinyl for the same record...but I've start to slip on that commitment this year as I've found myself hunting down additional copies of older records, and feeling compelled to grab some multiple copies of newer releases.

I don't know why I'm doing it, since I get more of a kick out of concentrating on filling the more serious holes in my collection...but I guess I still find some joy in collecting multiple copies for some bands as I keep finding myself drawn to it. 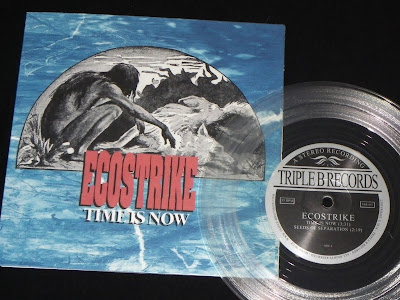 I absolutely loved the Ecostrike 7 inch from last year...I mean, this record is basically like time travelling back to the 90's, drawing some fat X's on your hands, and catching Earth Crisis and Strife down at the local YMCA. When Triple B reissued the record this year, I couldn't resist grabbing a couple more pieces of colored vinyl for it. 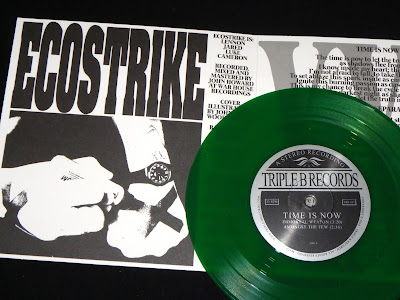 By the time that I realized that preorders were up for the record, I was already too late, and missed the purple vinyl pressing. Ugh. Still, I grabbed the green vinyl (300 pressed) and the clear vinyl (600 pressed). 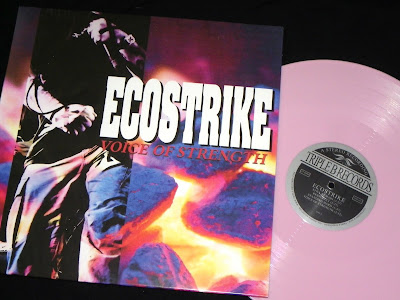 For the new Ecostrike LP that was released earlier this year, there were 200 pressed each of black vinyl and some crazy electric blue with red splatter design. I thought the splatter looked like shit, so I opted for the black vinyl. Now that I'm toying with the idea of buying multiple pressings, no one is putting up the splatter design for less that $40 on Discogs, while you can buy the black vinyl for $20. Kids love their colored vinyl.

Anyway, while I was buying the reissue of the 7 inch, I figured that I'd waste more money and buy another copy of the LP. Pink vinyl limited to 800.