I've long held dreams about collecting the UK Bronze pressings for the early Motorhead records. It was a great feeling to add my first piece to the collection with Ace Of Spades a couple years ago, but all has been shamefully quiet on the Motorhead front since then. 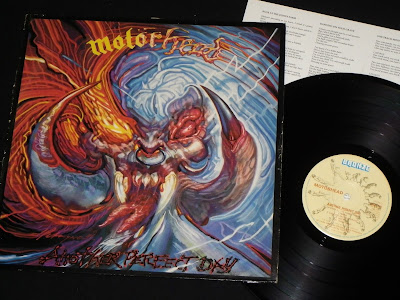 Imagine my surprise when I was recently flipping through the used bins at one of the local record stores in town, and I stumbled upon a vinyl copy of Another Perfect Day. When I saw it, I assumed it was the US pressing on Mercury, but after slipping the vinyl out of the sleeve and noticing the Bronze labels, I quickly added it to my growing pile of records that I was going to have to buy. 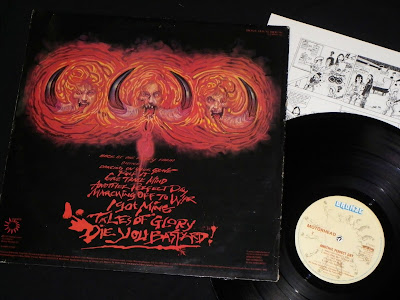 The 1983 release of Another Perfect Day was an odd time for Motorhead. Fast Eddie was out of the band, and Brian Robertson was on board after leaving Thin Lizzy. It would seem like an odd pairing, especially with Robertson's silk shorts and headbands, and Motorhead took a bit of shit at the time for it, but goddamn, this album holds up. I don't really listen to this one that often, but after giving it a spin today, I'm going to need to make sure this one gets some regular rotations into the playlist. So fucking good.