My buddy Sandwell is a terrible influence when it comes to live bootlegs. I don't own very many of them, but I do get a kick out of the few that I have. They feel special to me...and perhaps somewhat dirty, owning something that really wasn't meant for widespread public consumption. Seems as though Sandwell has been a on a bit of a kick lately, posting some really cool live bootlegs to his Instagram account, and...well...to put is simply, the motherfucker was making me jealous.

When faced with that feeling, I did what any other self-respecting record collector would do...I went shopping. 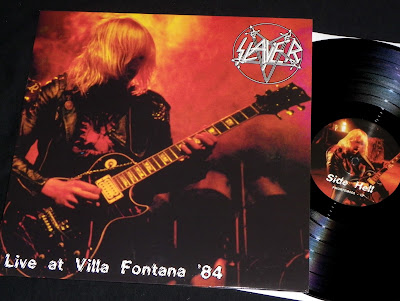 The webstore over at Hells Headbangers has supplied the fix to the bootleg itch in the past, and when I did a quick search recently, it came through for me once again.

This set was recorded live in San Antonio, Texas during Slayer's tour for Haunting The Chapel in 1984. This show was the only one that L.A. Slayer played with the other Slayer out of San Antonio (later renamed S.A. Slayer), and was dubbed a "Slayer vs. Slayer battle of the bands". I can only assume who came out on top in that match up. 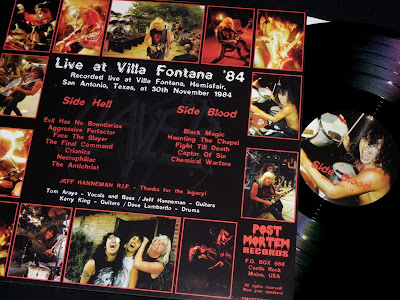 This is a soundboard quality live bootleg, and it is cool as shit to hear early songs like Face The Slayer played live...plus we get Necrophiliac played pre-Hell Awaits. Great stuff.

Damn. I'm the jealous one now.