I've always found it incredibly difficult to part with any records that I've added to my collection. It doesn't matter if that record has sat on my shelf for 10 years, gathering dust because I really don't care for it...I've lived under the shadow of fear that years later I'll regret letting it go. So I've been a hoarder. At this point in the game though, I'm running dangerously close to running out of shelf space. Desperate times call for desperate measures, and I've started selling off records that reflect some of my poor decision making of years past...stuff like needless reissues and multiple copies of records that I generally don't care that much for.

While the process was a bit painful to start, it was amazing how easy things got once some money started showing up in my paypal account from sales. With $100 in my pocket from selling a couple of Ghost records, I decided that I want to take down a heavy hitter from my want list. 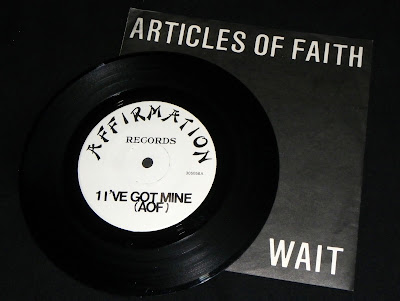 I'm a huge fan of Articles Of Faith, but outside of the Bitzcore compilation from '91, I don't own a single piece of vinyl from them. With the new Dead Ending 7 inch getting daily spins, it seemed like the perfect time to look into some AOF vinyl.

I always assume that Articles Of Faith is underrated in Hardcore circles, but the going price of their early records tells me otherwise. When one popped up on discogs a few weeks ago, I knew that I had to go for it. 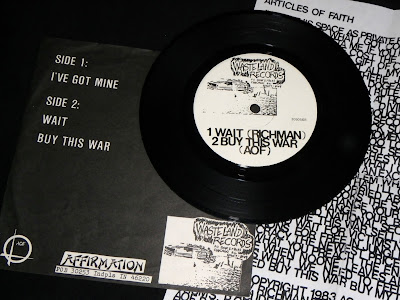 For a record over 30 years old, this is in great condition, and the music is still as vital today as it was when it was released in 1983.

Good to see you gunning for originals of old classics. Its a slippery slope now though....

Still need this one too, so much harder to find than Want We Want Is Free.