I was a huge fan of Overkill through my teen years. From '85 to '89 they had an amazing four album run that I lost my metalhead mind over. By the time their fifth album, Horrorscope, was released in 1991, Metal was a thing of my past, and I wasn't spending much time looking back. Hardcore was where it was at, and news of a new Overkill album did nothing to capture my attention. 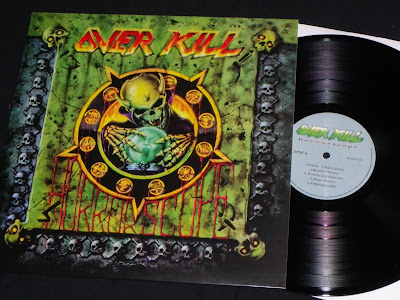 In my defense, as we moved into the 90's, some Metal albums were starting to feel a little flat. A string of tried an true bands were just starting to not measure up anymore, and with guitarist Gustafson recently leaving Overkill, I played it safe, and just ignored their latest offering. It took me probably over 10 years to finally bother checking out Horrorscope, but when I finally did, it knocked me on my ass. While the album might not meet the high quality put forth by the first four albums, Horrorscope comes damn close. 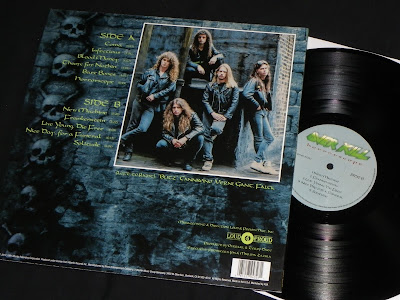 When it was originally released in 1991, mainstream vinyl was dead in the US, and the only pressings were available from Europe. 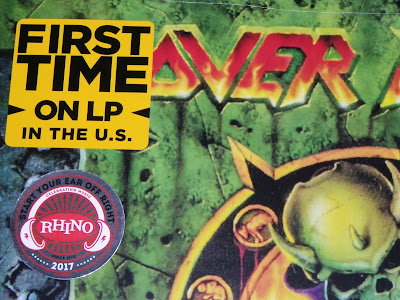 2017 finally sees a US vinyl pressing of this great album. As I stood there in the record store, holding this album, I was torn... a part of me wanted to not rush into this reissue, and cooler heads were telling me to wait and chase down the original Euro press. That would have been the smart move, but sometimes I'm stupid and impatient. Instant gratification ruled the day, and I bought the reissue. Breaking the seal, and opening the vinyl when I got home, put me into buyers regret. Looks like the reissue went cheap and didn't include any kind of insert or lyric sheet like the original pressing. Fuck record stores. I should just stick to buying whatever I want through the internet.