Last summer I spent a lot of time immersed in 1996. I listened to those records a lot, and it would occasionally inspire me to reach out and spend some time in the neighboring years. Man, the 90's had a definite sound, and while I'd avoided revisiting that decade for a long time, it was nice to be back inside it. My record collection is pretty thin around this time, and it was exciting to go back and buy a bunch of vinyl from those years. After discovering and picking up the Man Will Surrender 12 inch, it got me thinking about other Equal Vision bands from that period, and I added some stuff to my Discogs Wantlist. 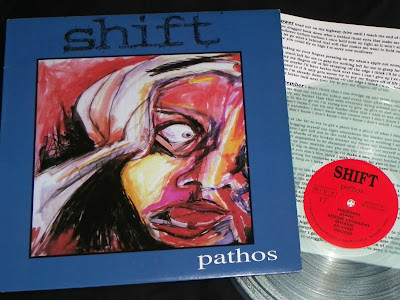 One of the records that I was looking to grab was the Pathos album from Shift. According to Discogs, the album was released on clear vinyl, but there weren't any listed for sale, and one had never been sold through the site. The last record of one selling was on eBay...and popsike showed that as the only one...ever...and that was back in 2015. They didn't seem to come around very often, but I threw it on my Wantlist, and hoped for the best.

When Discogs notified me that one was available for sale, I jumped at it, determined to get it before it disappeared. 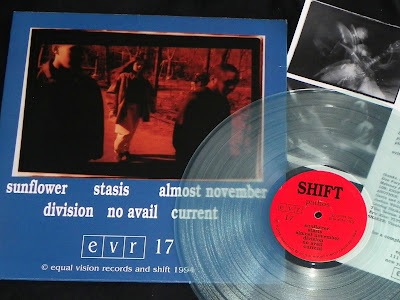 Man, I LOVE this band and especially this record. Got it when it came out and have never tired of it.

Classic. Excellent pick up. I'm gonna have to pick one up myself one day.