Back in August of 2016, Marcus and I came to an agreement on a trade. He was looking for a copy of the new Descendents album on white vinyl that was only available in US independent record stores...and I was happy to hook him up. Instead of paying me straight up for the record, he offered a trade. After toying with my emotions, and proposing a trade for some Bad Religion vinyl, he pulled the rug out from underneath me, and said he was just joking. Feeling broken and betrayed, I was in a fragile state of mind, and blindly accepted when he asked if I wanted a copy of the Brotherhood album from Crucial Response on pink. 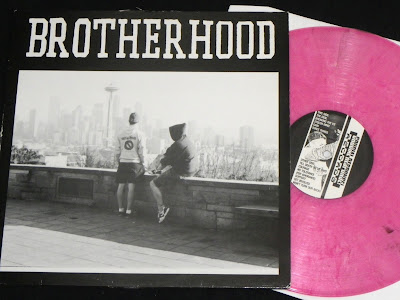 Initially, I wasn't too stoked on the trade...I mean, it was certainly a hell of deal for me...Brotherhood on pink, compared to a new release from Descendents...I was obviously coming out on top here. I just wasn't going to find much excitement in a record that I already had three other copies of...especially when I'm trying to avoid the multiple pressing game. Still, my white vinyl copy of the Brotherhood album came from Marcus, so it seemed appropriate that he was sending the pink as well.

My opinion completely changed once the vinyl arrived. I mean, damn, this colored vinyl looks amazing. It is probably one of the nicest looking record in my collection. That pink color, with the small smudge of black in there, just looks so damn good. Great trade...even if it took about six months to complete. Thanks Marcus! Let me know when you have an extra copy of this record on green vinyl, and I'm sure we can work something out. 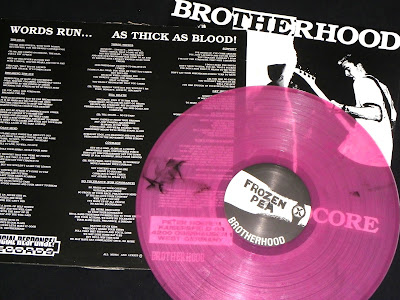 I'm trying to remember how I ended up buying this by accident. I think what happened was that there were two items ending on eBay in the middle of the night (for me), so I put bids into the sniper. However, what happened was that I managed to cock it up. I copied & pasted the item number for this record into the sniper and put a low-ish bid on it, like say $21 or so, because I already have it & just figured I would buy another if I could get it for cheap as I could probably trade it. After taking care of that one, I copied & pasted the second item number into the sniper and put a higher bid... or so I thought. I can't even remember what the second record was at this point. But when I woke in the morning I found I had won the Brotherhood record for $36. I was confused as I thought I had only bid $21. Then it dawned on me what had happened. I had somehow failed to copy the second item number from ebay, and instead pasted into the sniper the item number for the brotherhood LP for a second time. So in my head I was bidding on something else, but in reality I had entered two snipe bids for the same record, which meant I bought it for more than I wanted to pay. And that, ladies and gentlemen, is how you buy a record by accident.

Ha ha ha...great story! I was wondering how something like that could happen. Damn you technology!