Approved By The Cosmic Code Authority

A little over five years ago, there was an explosion of great Rock bands coming out of Europe. They looked like they had stepped straight out of the 70's, and they had the power chords to match. Some of those bands had a pretty good run, and in terms of today's standards, they were pretty successful. One of those bands that seemed to fly under the radar was Horisont. Even releasing three albums on Rise Above didn't seem to get them much love.

I've been a fan of the band since I first heard their debut, and I've loved their straight forward Rock approach. It blows my mind to think that they have been around for around seven to eight years. It seems like just a few years ago that I was discovering them. How has so much time passed? 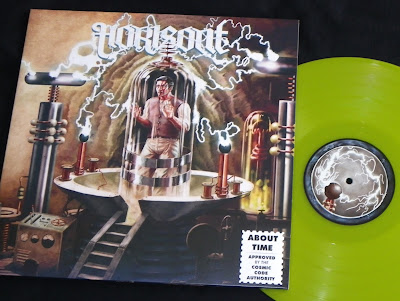 Horisont are no longer with Rise Above, but with About Time, they keep doing what they do best.

While it took a while for their last album, Odyssey, to grow on me, About Time hits me right from the start. Great album. 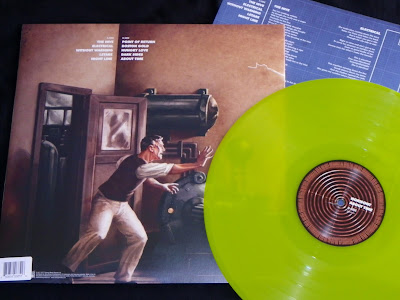 For the evening of the Super Bowl, I had the option to stay home and watch the Patriots play, or head out with a friend to go record shopping. Pfffft....records win that fight every time. We jumped in the car, and headed to Bull Moose with my sights set on the new Horisont album.

300 pressed on yellow vinyl, exclusive to US indie record stores. 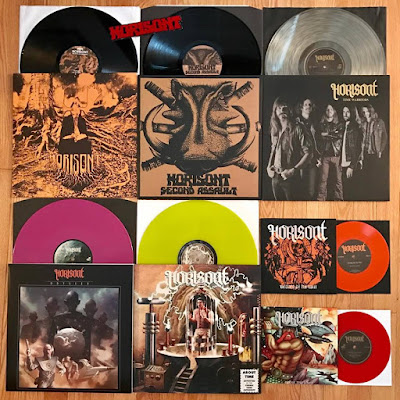 With About Time, Horisont release their fifth full length album. I was kind of dumbfounded by that fact when I realized it. Five albums. I don't think that there are many bands these days that record that many albums. Seems like a long lost art to have bands stick around and evolve, and release a new album every other year. I was so amazed by their longevity and production that I had to pull out their full vinyl catalog for a photo.

Damn. I want one of these. Hope I can pick one up on my trip to NYC.