Thick As A Brick

I've never really given a shit about Jethro Tull. They were always just "that band from the 70's that had a flute". Nothing really appealing there for me, so I've avoided them.

Three years ago, Ian Anderson from Tull was coming through town and playing the Thick As A Brick album in it's entirety, and my friend, Jeff, wanted to go. I had zero interest, but it was a free ticket and an excuse to hang out, so I said I'd go with him. Ten minutes before he picked me up, I decided to get a preview of what I was in for, and I checked out some of the album on youtube. Much to my surprise, it was pretty good. It didn't knock my socks off, but I did grab a free download through soulseek. 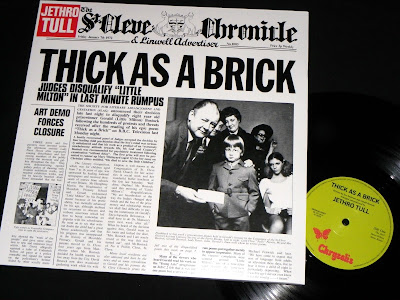 After that show, I never really went back to spend much time with the album...and I generally forgot all about Jethro Tull. Earlier this year, I discovered the Aqualung album, and since I can basically listen to this album every day, and not get tired of it, I figured that it might be time to start spending a little time with Thick As A Brick as well.

Since I had grabbed the recent Steven Wilson remix pressing for Aqualung, i did the same here with Thick As A Brick. 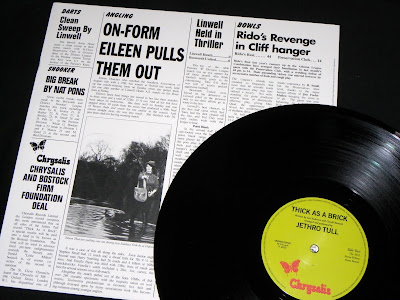 Originally released in 1972, Thick As A Brick was Jethro Tull's response to the critics calling Aqualung a concept album. Ian Anderson decided to give everyone the mother of all concept albums, and take a playful swipe at the prog rock bands of the time as well, with TAAB comprising of one single 40 minute song...split between the two sides of vinyl of course. Given it's immense weight, I suppose that I can be forgiven for not picking up on how great this record was when I first heard it. There is a lot to take in, but once I committed to it, I found that I'd started giving it repeat listens on any given day. 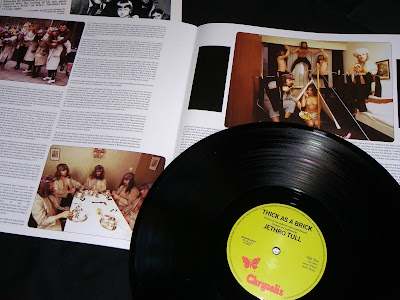 The original packaging for Thick As A Brick came with an elaborate newspaper print cover, and this 2015 reissue, does a great job adapting that into the 12x12 booklet, which includes bonus interviews and photos from those days. Well done.