Back in 2014, Mos Generator kicked up quite a storm in my Top 10 list for the year...seemingly coming from nowhere with Electric Mountain Majesty, and shooting up to the number two spot. Man, I fucking loved that record. They are a band that should be huge in the Heavy Rock scene, and yet it seems that they are still largely ignored. Shame. 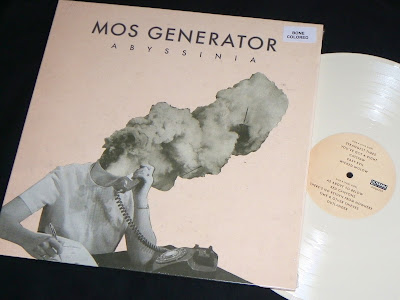 The band has been hitting the road quite a bit over the past year, so hopefully that will help get their name out there, and push their new album, Abyssinia, to the masses.

With Electric Mountain Majesty, I missed the chance to score the colored vinyl, so I was glad to not make the same mistake with the new record. 200 pressed on "bone white" vinyl. 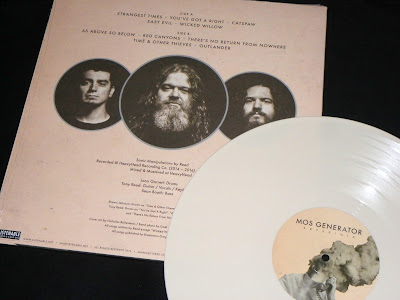 While Abyssinia is a killer record, I still find it kind of underwhelming as a new release. Mos Generator released three split 12 inches last year, and of the ten songs on the Abyssinia LP, seven of them were from those splits. This means we are really only getting three new songs here. Man, I wish the band would stay away from the split format, and just release their own shit.