Forced Order isn't really a band that I'd expect to like. They have this strong metal vibe that I'm not really all that keen on hearing from a hardcore band, and even though they appear to be Marcus's favorite band, I'm still surprised with how much I enjoy what I've heard from them. I picked up their One Last Prayer record last summer, and that shit got a lot of spins. As I was in the REVHQ store picking up the Be Well 7 inch, I figured that the time was right to finally pick up the Vanished Crusade album that REV released five years ago. 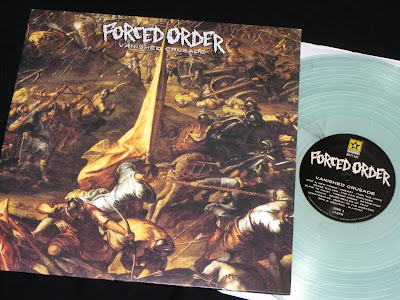 I wasn't sure if I was going to be able to hang with another Forced Order record. I mean, I really liked One Last Prayer, but did I like this style enough to hold my interest for two albums? Turns out the answer is yes. This is aggressive and angry, and when I'm looking for that, Forced Order deliver. 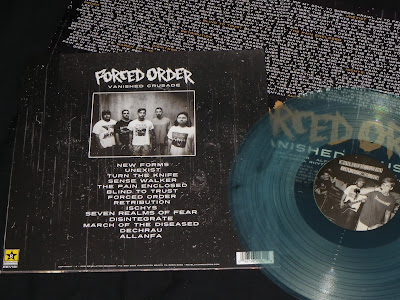 I find that the pressing for this vinyl is strange. The record is fourteen songs long, but twelve of them are on side A...with the last two songs which consist of five minutes of instrumentals are on the B side. When I'm spinning the record, side A is all that I really need.

Third pressing on clear vinyl and limited to 328.

This post has been the highlight of my day today. Well done!

Once I saw you post the pink vinyl, I was excited to post this clear vinyl copy. It is all about the timing.