Two years ago, Marcus posted on his blog about the Vanished Crusade album from Forced Order. He had picked up three different pressings of the record, and I wasn't sure if he truly liked that album that much or if he was only buying it because it was released by Revelation Records. I asked him if Forced Order was something that I should check out, but as soon as he made the comparison to Integrity, I got the fuck out. I wanted nothing to do with that. 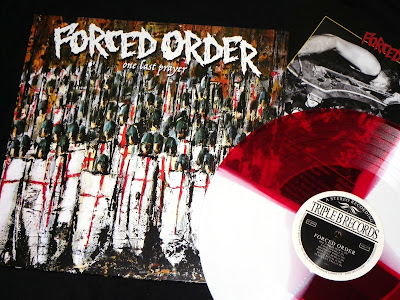 When I was recently adding records to my cart over at the Triple B store, the cover for One Last Prayer caught my eye. I didn't remember my exchange with Marcus over Forced Order, so I figured that I'd give them a listen. I went in with an open mind, and I was surprised with how much I liked what I heard. Without pause, I listened to the entire One Last Prayer album on Spotify, and proceeded to add the vinyl to my Triple B cart. I was sold. 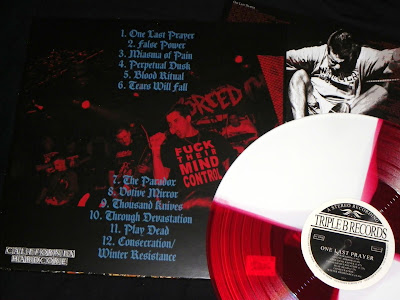 Honestly, I don't understand my attraction to this record. With the term "metallic hardcore" thrown around, and a bio that drops names like Hatebreed, my good sense tells me that I should hate everything about this...but still, I keep coming back to this record, and I'm giving it plenty of spins. To me, I'm more reminded of 90's bands like Culture and One King Down, and that's the kind of shit that I can get onboard with. Who knows, maybe in a couple of years I'll actually get around to checking out their stuff on REV.

I love the record cover for this, and the white/red vinyl complements it very well. While it isn't the most limited, as far as I'm concerned, this is the colored vinyl to own.

Well this is a surprise for sure. On seeing this post I gave this one another listen. Generally I'm not into it. The first one I do like, but this one just didn't grab me. But I do concur that this colour is far nicer looking than the most limited one, which I have, which is ugly as shit. Somehow I think I missed putting it on the blog as I just searched and couldn't find it. But it definitely looks horrible.

No one was more surprised than I was!