Back in January, I found myself sinking into a deep obsession over the New Wave Of British Heavy Metal. I was reading Martin Popoff's book This Means War...which is book number two on the subject, covering the NWOBHM scene from 1981 through 1984...and I got it in my head that I wanted to make some progress adding these records to my collection in 2019. There are still a bunch of albums from Tygers Of Pan Tang, Witchfynde, Samson and Grim Reaper that I still need to add to the collection...and I really should be focusing on that, but I can't help that my focus has been stuck on those NWOBHM singles instead. 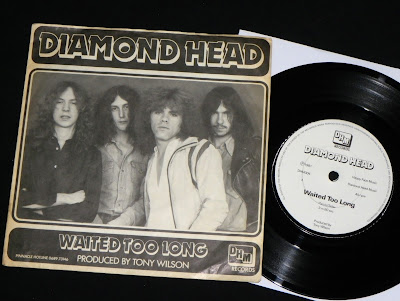 I love the early Diamond Head songs, and it was such a great feeling to add the Streets Of Gold 7 inch to the collection earlier this year, that I figured that I'd also make a run at the single for Waited Too Long b/w Play It Loud.

These songs aren't as strong as the Lightning To The Nations album, but still, this single is still a good time. 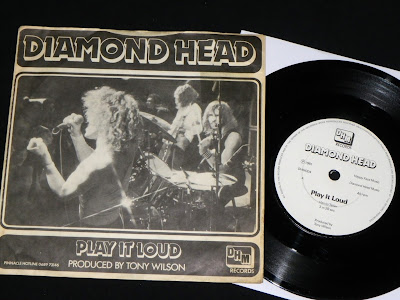 I'm surprised at how relatively inexpensive these Diamond Head singles were to grab. This single can be picked up off Discogs for six or seven dollars, which is incredibly cheap given how much a new 7 inch goes for these days. Granted, I bought this copy for $15, but that was only because it was a US seller, and it saved me shipping fees in the long run.