I've spent quite a bit of time obsessing over early 80's metal, especially those bands that were coming up in the L.A. scene at the time, and helped shape hair metal for the coming years...and opening my mind to some of this stuff has lead to some amazing discoveries. Seriously, the top five albums that I've listened to the most this year, have all been records from the 80's that I've really only just heard over these past few months. It has been a blast finding these hidden gems, and the best discovery, so far, has been the first Black 'N Blue album. 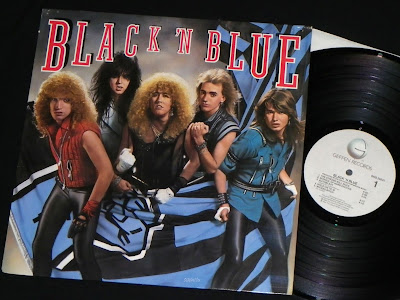 I remember seeing the Black 'N Blue name around back in the 80's, and I was familiar with their track, Chains Around Heaven, from the first Metal Massacre comp...but still, I kind of wrote them off as a weak hair metal band, and never really bothered with them. My mistake. Being in a hair metal mood, I downloaded a copy of the self titled Black 'N Blue album, and was quickly taught a lesson on how fucking good this band was. Holy shit, this record is so much fun. Pure early 80's heavy metal, and I can't get enough of these songs. 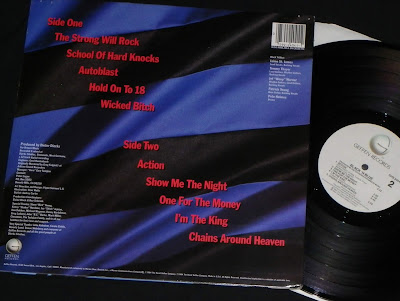 While this album was blowing my socks off, apparently the vinyl is readily available for cheap. Spent big bucks on this near mint copy that was still in the shrink wrap...twelve dollars!

This is such a killer record. Not to assume what you have or have not checked out, but two other records from the earlier days where heavy metal and "hair metal" or whatever were more intertwined that I would heavily recommend are Great White's s/t from 1984 and Icon's s/t also from 1984. To me, that Great White is, compared to their later catalog, the way early Ratt or Dokken were, more heavy metal.

Funny that you mention it, because Great White were another band that I've really ignored, but I checked out their album from '84 yesterday and loved it. Good call! I'll have to check out Icon as well!