The Formation Of Damnation

Back in 2008, the Death Angel album wasn't the only one that I was too lazy to chase on vinyl. I was having a great time getting back into metal after a 15 year hiatus, but I was still very much a hardcore kid, and wasn't wasting much time or money with heavy metal records. It would take another few years before I finally let go of the CD dependence, and moved strictly to vinyl, and because of that, I'm still slowly adding records to the collection that I missed the first time around. 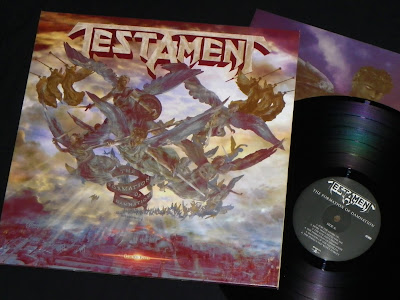 One of the big metal albums to come out in 2008 was the new Testament record, A Formation Of Damnation...and this was a big deal because it featured the return of guitarist Alex Skolnick, who had been out of the band since '92. This was also the first new Testament album since I'd gotten back into metal in the 2000's, so I was excited for it, and it totally delivered the kind of thrash that I was looking for. 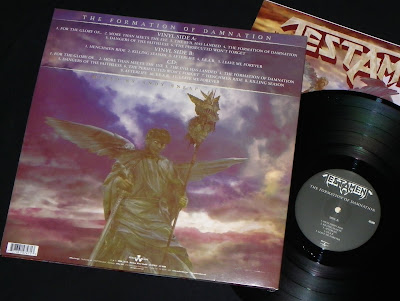 Like the Death Angel album from 2008, the Testament album was also originally released on colored vinyl, and I'd entertained thoughts of chasing one...but with the 2019 reissue, it was just easier to order it direct from Nuclear Blast, and be done with it. I went with the black vinyl option because silver vinyl looks like shit.