I've been having a great time immersing myself into those albums that I was listening to back in 1989. Thrash ruled my world at that time, and it was such an exciting time to be buying albums. '89 was the year that I finally got out of Portland, and hit the road with some friends to go to our first concert in Boston. Testament, Wrathchild America and Annihilator were playing at The Channel, and so we decided to head down for an adventure. We had no fucking idea where we were going...we just knew that if we took interstate 95 south, it would go right through Boston. I bought a street map of the city, and we drove around for hours, trying to figure out how to find the club. Thankfully we gave ourselves plenty of time, and we still managed to get to The Channel hours before the show started. It was my first club show, and it changed my life. This was no arena show...this was electric and felt dangerous. After watching the bands play, I knew that I was going to have to come back, and soon I was making trips to Boston and Providence a couple times a month for shows. 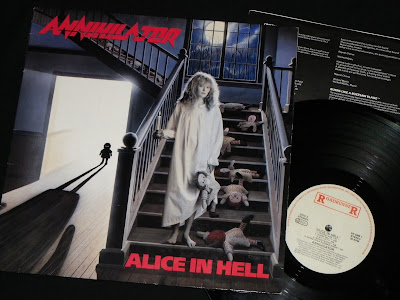 I haven't really given Annihilator much thought over recent years, but in going through my 1989 playlist, Alice In Hell has really blown me away. I'd completely forgotten just how amazing this record is. After giving it a listen and kind of getting reacquainted with these songs, I immediately wanted to listen to them again. This shit was so good, that I had to keep returning to it, and of all the 1989 albums that I've been spinning lately, I've probably listened to Alice In Hell more than any of them. I knew that it was time to track down the record. 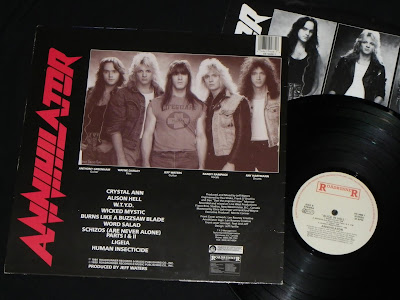 I ended up buying the Euro pressing from overseas, because it was just easier than trying to track down a US pressing in great shape.