My attempt to follow in Marcus' footsteps for the Test Press Challenge, and ending the year with 52 test pressings, has always been a joke. Still, I have managed to pick up a fair amount this year, and while I really have no hope of getting to the end goal, I did get a bit of Test Press Fever. After scoring my sixth test last month, with the Winds Of Change comp, I found myself on the hunt for another. When I saw a chance to grab a cheap test from the Nemesis Records catalog, I quickly threw in my winning bid. 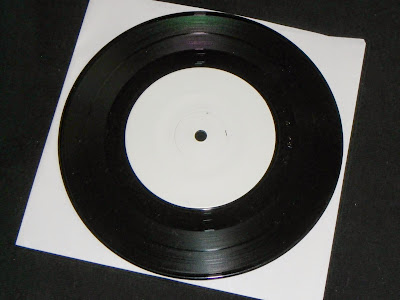 While a $5 test press from Nemesis might sound like a great deal, it really isn't that impressive when the band is Fishwife. Honestly, I'd never heard this band before, but since it was on Nemesis, I figured that I'd roll the dice and take the chance. Terrible idea. Nemesis, what were you thinking?

I once bought the regular version of this 7" for the exact same reason - because it was on Nemesis Records. I think I played it once then sold it again.

Your test press pace seems to have slowed. You're never going to make the 52 at this rate. Get on with it!

i would like to say that this is the best entry you have made so. made me laugh. such a terrible record. havent listened to it in decades, and dont plan to either.

it is a test press though, and thats pretty cool.