Around 2007, I started to make an active attempt to discover some new Metal bands. The Thrash revival was really picking up steam with bands like Bonded By Blood, Evile, Warbringer, and Gama Bomb, and of course, I gravitated to these new bands. I ate up anything related to that Thrash revival, and in my fit of downloading all that I could, I ended up checking out a great Brazilian band called Violator. 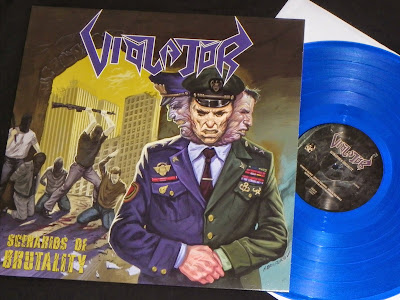 Last year, I was surprised to discover that they were still around, and had even released a brand new album, Scenes Of Brutality. One of the things that I really like about Violator, is that their lyrics aren't just the same old mindless violence and Satanic fare (not that there is anything wrong with that). Instead, they cover real world violence and oppression...the things they experience and see on the news each day. Lyrically they are a cool throwback to bands like Sacred Reich. 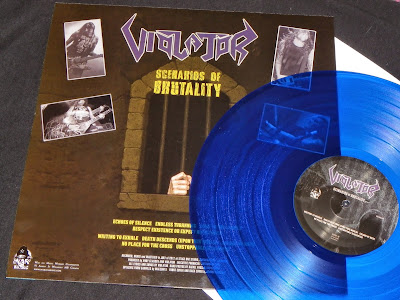 100 pressed on "cop carcass" blue vinyl from War On Music. 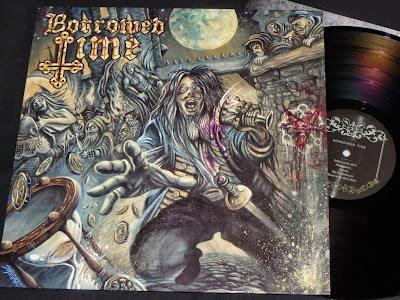 As a bonus, War On Music threw in a free copy of the Borrowed Time LP. This one has a bit more of a traditional Metal sound, but it fails to really grab me. I dig some of it, but either the songs just aren't terribly strong, or the rough production takes away from it. I probably won't spend a lot of time with this one, but I am interested to see if they can take this to the next level, because there is some potential here.

Hah violator aren't bad at all. Reminds me of Nuclear Assault