Shortly after watching Living Fast, Ryan Waste became one of my favorite dudes in the current Metal scene. He seems like a real down to earth guy, and his Metal record collection is second to none. Between the Living Fast show, and talking with Doug, I was soon on a big New Wave Of British Heavy Metal kick. The obsession was so overpowering that I even told Doug that given the choice of a Chung King or an original Diamond Head LP with the white sleeve, I would have gone with Diamond Head. That's how deep I was. 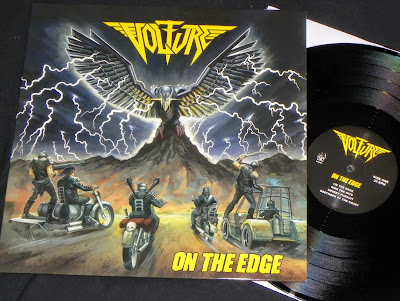 While Ryan Waste's band, Volture, can't be considered NWOBHM, the influence is definitely there. Follow up your early 80's Metal playlist, featuring Angel Witch and Satan, with Volture, and the transition between bands would be seamless. 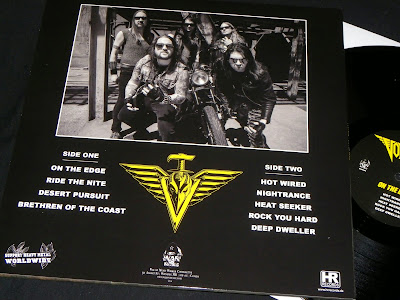 While I picked up a free download from the Volture bandcamp page, it wasn't long before I was ordering the vinyl from War On Music. I thought that I got my order in for the clear vinyl pressing, but I received black vinyl instead. Oh well...I'm not going to sweat it. 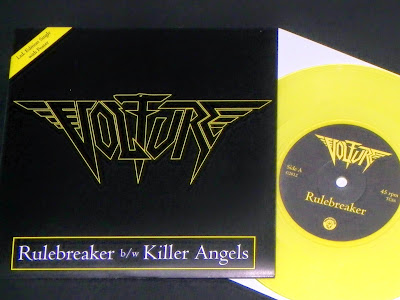 I couldn't get enough of Volture's On The Edge album, so I grabbed the Rulebreaker single from Tankcrimes. Even with a different singer for the earlier stuff, this still sounds great. 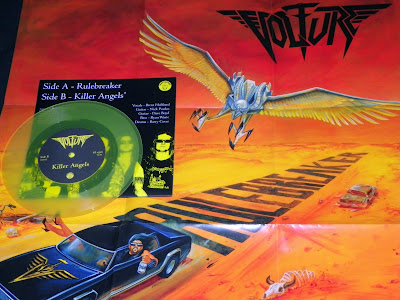 The 7 inch is pressed on florecent yellow vinyl and comes with a giant poster. Looking good.

Love the album! The 7" not as much as that first singer's voice was so shrill. Plus he looked way out of place in the band with that chrome dome.

I had no problem with the old singers voice, but man, it was awkward to watch him in the Rulebreaker video.

The whole video is awkward. The standing around looking tough or walking excruciatingly slow shit is just plain bad.