Black Sabbath may be one of my favorite bands of all time, and I consider Orchid to be a present day version of that greatness. Orchid attack with songs full of heavy doom riffs...some of them sounding like they were lifted direct from Sabbath's back catalog. An excellent homage to the Sabbath legends, while delivering songs that still pack plenty of power. 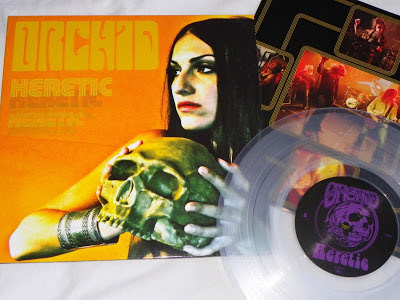 I don't typically collect multiple copies of Metal records, but in this case, the excitement got the better of me and I couldn't resist. I fell totally in love with Orchid's 2011 release, Capricorn, and when Nuclear Blast announced they were releasing the band's follow up EP, I was beyond excited for the new material. Of course the EP was only available overseas, but without blinking an eye, I still added two copies of the Heretic 10 inch to my cart. 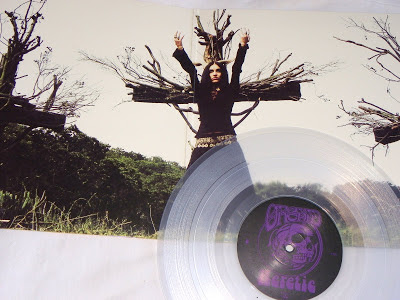 Cool ass photo on the inside of the gatefold, with the vinyl delivering three new amazing songs, plus one that was included on last year's Capricorn LP. 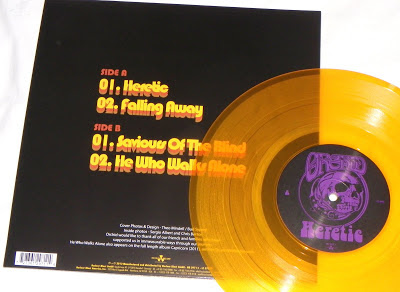 Clear and orange (also known as gold) vinyl. Black vinyl was also available, but I didn't bother buying one at the time. Now I want one. Record collector regret. 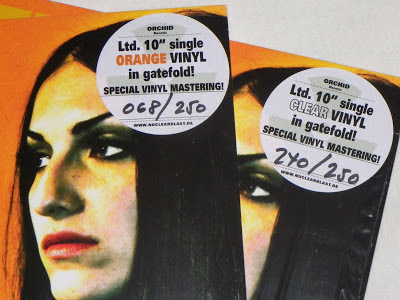 Each pressing was hand numbered and limited to 250. It's a nice touch, but completely irritating that the sticker was affixed to the shrinkwrap. This record has gatefold sleeve, so in order to see the full gatefold packaging, you have to remove the shrinkwrap and thus remove the sticker. Frustrating. In the end, I ended up using a hair dryer to heat the sticker and remove it from the shrinkwrap, so I could then affix it to the poly sleeve. Pain in the ass.

that hair dryer tip is pretty good! in the past i tried to put the shrink wrap on the heating but that didn't really work out. so i used to cut these stickers out of the shrink wrap. now i pulled them all out and used the hair dryer. with one exception it all worked out perfectly!
by the way i like your blog. amazing that you're around since 2006. i almost worked my way through your back blog. keep it up, it's always interesting!