Crusades was a huge surprise for me last year, almost working their way into my Top 5 for 2011. Their blend of melodic, upbeat, and dark punk rock, with a strong anti-religious stance, was absolutely perfect. I could not get enough of their The Sun Is Down LP. Sandwell was the one to introduce me to Crusades, and it was him again that let me know they had released a new 7 inch over the summer. 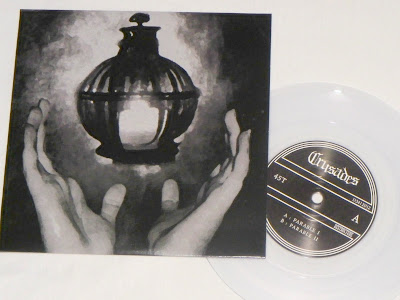 I really wanted to get this new record, but I couldn't find it available in North America. If I was to order it, I'd have to pick it up direct from the overseas label that released it. I wasn't excited to have to pay more in shipping than the one record that I wanted...so I waited. I think I lasted almost a month before I broke down and finally ordered it from Destructure overseas. Oh well, at least I was able to pick up the clear vinyl that was limited to 100 for this release. 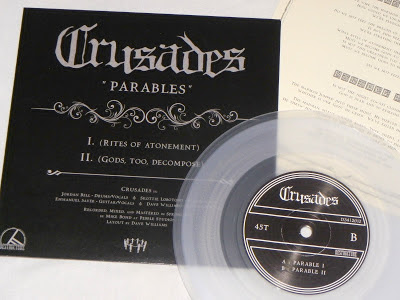 Upon first listen, I wasn't too excited over the Parables 7 inch. At first I thought that the songs weren't as strong as the ones from the LP, but the more I listened to them, the more I liked them. I think that was initially threw me off was that the two song 7 inch was just too short, and it was over too quickly for me to really get into them. After sitting with these two songs for a couple of weeks, I'm loving them and hoping for some more from this band.