I started working on my Fire & Ice collection back in December of 2010. When collecting records, my mind kind of wanders. I start out all gung-ho on a band, and after I buy a few pieces of their vinyl, something else catches my eye and I move on. That has not been the case with Fire & Ice. I've been locked in a focused, and now, almost two years later, I've picked up the last two 7 inches that I need. 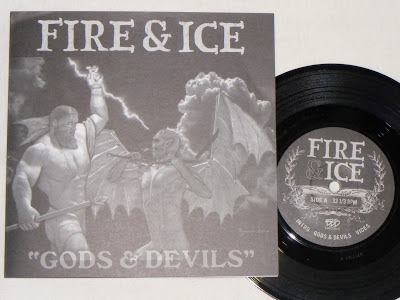 While not very exciting, the black vinyl for Gods & Devils was still a necessity. All vinyl from the first pressing had sold out by the time I got into the game, but apparently Triple B held on to this one so they could flip it to eBay. That's cool, I guess. All profits go to future Triple B releases. 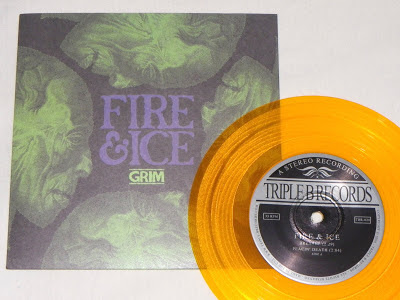 The clear orange pressing of Grim was limited to 200. I've been on the hunt for this record for a while, and when Triple B put a copy up on eBay, I was determined to win it.

Does this fully complete the collection? Not yet. But I'm close...so very close.

Are you including tests in this collection when you say you are going for completeness? I know you usually don't, but given you have tests of the 12"s then in my mind you have to be going after the 7" tests... right?

I generally consider tests to be a collection bonus, and not mandatory. If I have the opportunity to get the Grim and G&D test for a good price, I'd take them, but I don't need them to consider this collection complete.

So what else do you need then other than tests?

I've got one more piece of vinyl on the way, and then I'll be doing a finale post.