Revelation Records celebrated their 25th anniversary with a string of four shows out in California. The list of bands was impressive...Youth of Today, Gorilla Biscuits, No For An Answer, Sick Of It All, Statue, and Quicksand to name few...however, it wasn't until it was announced that In My Eyes was doing a reunion set, that I became really jealous. I wanted to make it out for this show, and I was crushed that I knew I wasn't going to be able to swing it. 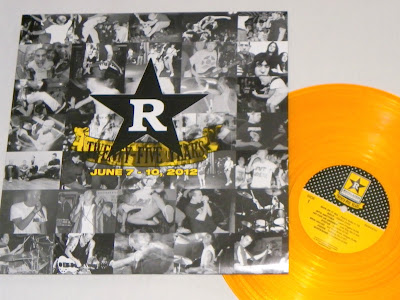 I did, however, have a friend that was headed out to the shows with a VIP ticket. Knowing that he wasn't a record collector, I told him that I'd buy any special vinyl that came with his VIP package. As a memento of the occasion, REV released a compilation LP containing live songs from the bands that were playing in the anniversary shows. While the LP was available to everyone at the show, the gold colored vinyl was only available to those that purchased the VIP package deal. 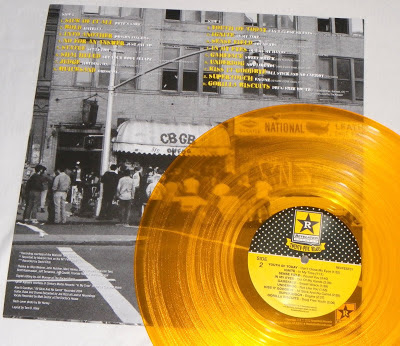 When it was announced that REV was also doing a set of shows in NYC, I check in with Rob and Paul to see if they would be up for a roadtrip. We weren't going to be able to swing four days in NYC, so we had to wait for the line ups to be announced and then pick the two days that were most attractive to us. When it was announced that Chain of Strength was playing, the Hardcore world lost their collective minds. Holy shit, this was going to be epic. Then as the remaining bands started to be announced, and who was playing each day, I couldn't help but feel a little let down. There was a whole load of "who gives a fuck" bands...Iceburn, On The Might Of Princes, Shai Hulud, Damnation A.D....yawn. There were also a few bands that, while I enjoy them, I wasn't excited to make a six hour driver to NYC to see them...Gameface, Shook Ones, Shades Apart...meh. For the really good bands that I wanted to see, they were spread out over the four days, so I would be forced to miss some of them. My friends and I opted for the Saturday and Sunday shows, catching Battery, Bold and Chain one night, and then Supertouch, Youth of Today, and Into Another the next. 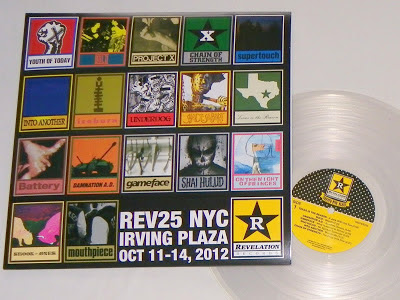 Once again, REV pressed a comp LP for the NYC anniversary shows. The cover for the record is a really cool way to represent all the bands that played NYC (even though Project X cancelled, and Sick of it All played a set). Like the Cali LP, this is very cool souvenir from this event...however, there isn't a lot here to be excited about. Other than the Statue and Shades Apart songs, which I'd never heard, or the Gorilla Biscuits covering The Abused...I'll probably only listen to this once or twice. 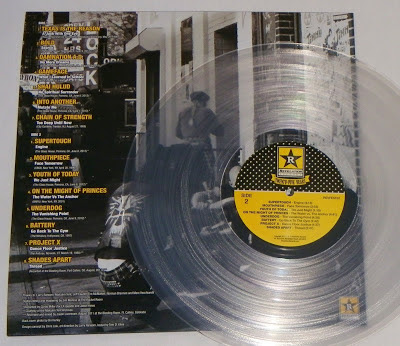 Agree that these will never be played. But they're still pretty essential for any serious Rev collector. But obviously way cooler to own if you were actually there.

SO did you see Iceburn? Someone told me they played all their early stuff. Their first LP is seriously good. I think I would seriously rather watch Iceburn than Bold too.

I did see Iceburn, but I don't know any of their songs, and I had no interest in really watching them.

Look, I love Bold, and I will be up front singing along anytime that I see them play...I just wish that they would stop playing.