Back when I was picking up the new OFF! LP from Interpunk, I mentioned it to Marcus in case he wanted to order one as well. Seeing that the distro charges insanely high shipping for overseas orders, he decided to skip it and try his luck elsewhere. Just in case things didn't work out for him, I decided to purchase an extra copy.

When the vinyl arrived, I checked back with him to see if he was interested in my spare. He was, and asked what I wanted for it. I'd had my eye on a Spilling Blood Without Reason LP from Voorhees that was listed on eBay from a UK seller. I mentioned that if he could get his hands on a copy, we could trade. This was in May. In July, Marcus posted about the copies that he bought for himself, and said that he was shipping mine out soon. With the backlog of vinyl that I've built up for this blog, here we are in October, and I'm finally posting my copies. 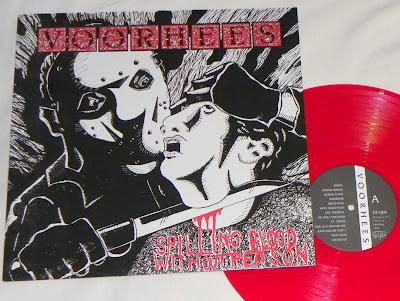 Spilling Blood Without Reason was originally released by Armed With Anger Records back in '94, and I remember picking up my copy through Ebullition mailorder. This thing was vicious, mean and hateful. It was so unlike the Spitboy and Rain Like The Sound Of Trains records that I was used to buying from them at the time. I loved it.

In 2010, Voorhees got back together for some 20th Anniversary reunion gigs, and Grot Records pressed up 500 pieces of colored vinyl for the event. 400 pressed on red vinyl. 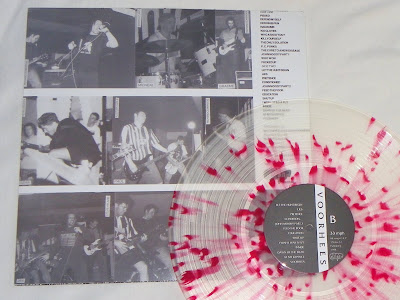 When I had asked Marcus for a copy of this album on colored vinyl, I was only aware of the red pressing. It wasn't until he put up his post, that I discovered a clear pressing also existed. It is limited to 100, and goddamn, if he got a copy for himself, he had better have gotten one for me as well. As it turned out, he had to put in some extra work, but he was able to secure me a copy. Much appreciated, man.

The album art for this is incredible. Brutality at its finest

Good to see these finally up on the blog! Sorry about the time delay on this trade by the way. I'll do better next time.