I was a little late for Midnight's 2011 LP, Satanic Royalty. Had I heard it a few months earlier, it would have easily made my Top 10 for 2011 list. The band plays an awesome blend of Venom/Motorhead influenced Metal...completely over the top. 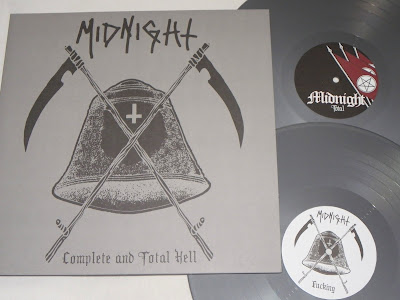 A couple months ago, I was listening to Satanic Royalty and found that I needed more Midnight. I knew that they had released some other material prior to that album, so I started looking into what I could get my hands on. Much to my surprise, I found that Hells Headbangers had recently released a double album from Midnight, capturing everything outside of the Satanic Royalty LP. 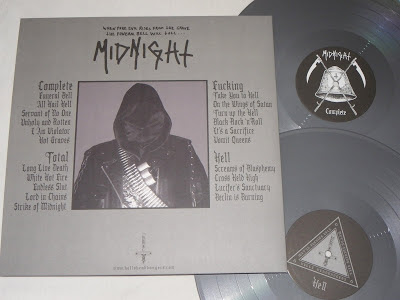 Of course, this collection isn't as strong as last years full length, but it is still a lot of fun. Like Satanic Royalty, the Complete and Total Hell compilation is not for the faint of heart, or the easily offended. Midnight delivers more songs of devil worship with All Hail Hell and On The Wings Of Satan...you know, typical Venom fare...but we also get stuff like Vomit Queens and Endless Slut. Come on, don't laugh...just put on your jean jacket that is covered in Mercyful Fate, Slayer and Exodus patches, and bang your fucking head. If it is too much for you, you are more than welcome to go check out that new DYS single...I heard that it's a banger. 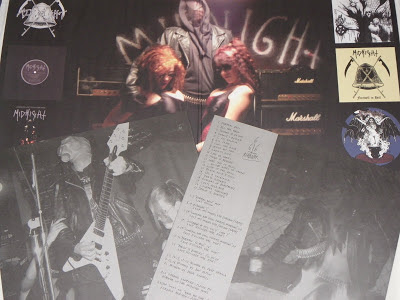 Grey vinyl, packaged in a gatefold sleeve to showcase the artwork of Midnight's releases that are included on the compilation. Oh yeah, we also get pictures of chicks hanging off of the Midnight dudes. Hell yeah.