It has taken me years to begin to appreciate some of the Melvins stuff...and even now, there are times when I can only take them in small doses. There are times when I am completely blown away by the incredible riff and guitar sound in one of their songs, and other times when they just drone on and lose my interest. My friend Rob, on the other hand is a much bigger fan than I am, and he has been trying to push the Melvins on me for a few years now. I'm slowly coming around, so he took the opportunity to buy me some Melvins vinyl for my birthday. 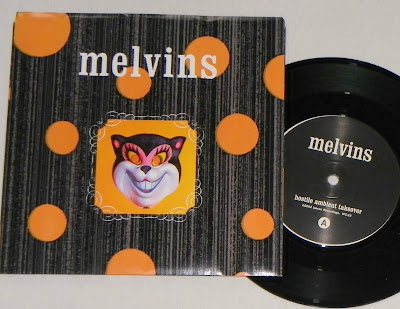 Back in 2003, the Melvins released a series of seven 7 inch records. Side A from each one ended up on their Hostile Ambient Takeover album, while the B Side song was exclusive to the 7 inch, and in most cases was a cover song.

Melvins vinyl typically sells out quick and then goes for big money on ebay. Rob sprung for Judas Chang 7 inch from the Hostile Ambient Takeover series, and damn, he picked a great one. The A Side original is really good, but it is the Mott The Hoople cover on Side B that really gets my attention. The song, Jerkin' Krokus, has a great Kiss feel to it...well, with the exception of that creepy part in the middle where the music stops and King Buzzo just whispers. Weird, but in a very cool way. 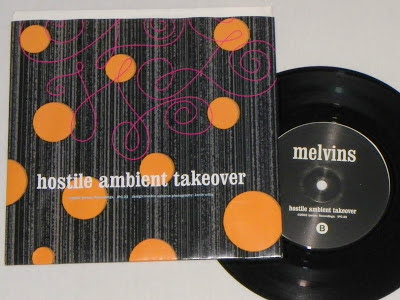 The packaging on this annoys the hell out of me though. If it wasn't for the internet, I wouldn't know the name of this record, or the songs that are on it...just part of the Melvins madness, I suppose.