Getting my hands on the Jethro Tull single for The Witch's Promise really had an impact on me. For some reason, I've recently found myself interested in old picture sleeve singles, and shortly after picking up that old one from Tull, I was jonesin' to get my hands on more of them. 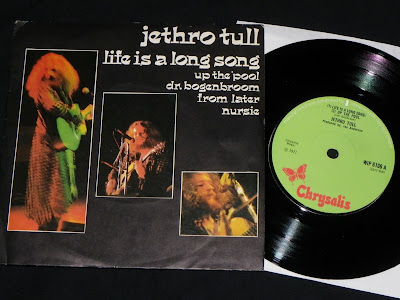 The Witch's Promise single had me checking out the Living In The Past compilation, and since that record collects some early non-LP tracks, I used that as my starting point when I was wondering what should be my next move in the 7 inch singles game. All five songs from the Life Is A Long Song single also appear on the Living In The Past comp, and all songs are great, but fighting the convenience of compilation, I decided to chase the original single from 1971. 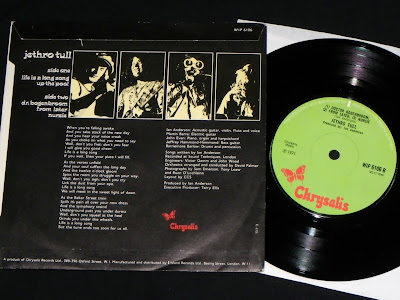 I was pretty casual with this mission, and figured that if I could find a copy for cheap from a US seller, I'd grab it. As luck would have it, there was one available from a seller in New York, with a reasonable six dollar price tag, and I quickly added it to my cart. 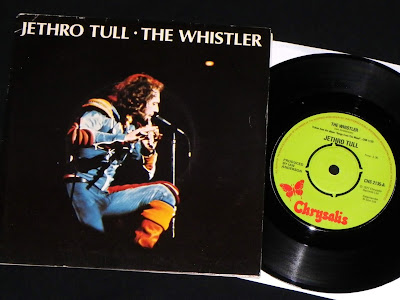 Before checking out, I decided to search the other records that the seller had available...specifically looking for more Jethro Tull. I was happy to find that they also had the single for The Whistler available, and only for a few dollars. Now, I'd never heard this song before, as it falls outside my Jethro Tull comfort zone, but for that price...and I just thought the photo of Ian Anderson with his flute, looked cool as hell...I grabbed that one as well. 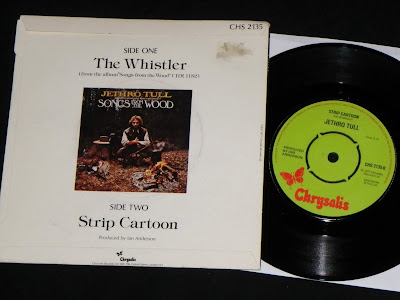 When I received this single, I wasn't too excited over the song, or the b-side Strip Cartoon, but with repeat spins, I'm liking this more and more. Maybe it is time to expand my Jethro Tull experience out to '77 or '78, and see what's up.