At this time last year, I may have had only two new 2016 releases in my record collection...the final Mindset record and the Red Hare 7 inch. Here we sit, two and a half months into the new year, and I've already got nine new releases on the blog so far...with a few more queued up and waiting in the wings. 2017 needs to chill the fuck out on new releases so that I can focus on older shit. 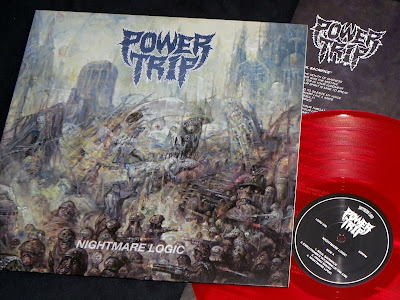 One of the biggest surprises so far this year has been the new Power Trip album, Nightmare Logic.

I've wanted to like the band since I first checked 'em out back in 2010 or so, but man, they have just never clicked with me. You would think this Crossover/Metal style would hit all the right buttons for me, but for one reason or another they have just failed to connect.

With a new album coming soon, I shouldn't have cared...but something made me shrug my shoulders, and decide to give it a shot. I saw they had a song up on youtube...the song title sounded kind of badass, so I headed over to check out Executioner's Tax (Swing Of The Axe). 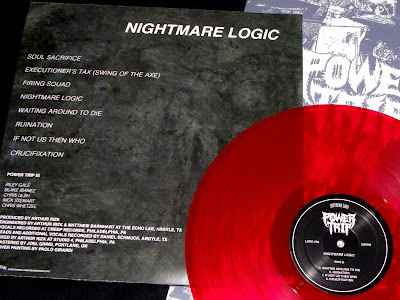 Damn! Has Power Trip always sounded this great, and I've been missing out? I can't believe how much I love this record. All out thrash attack. It kind makes me wonder if I should go back and give that first album another chance.

500 pressed on red vinyl, and only available at indie record stores.

Compared to other times in history, I have the feeling that 2017 will chill the fuck out... Not willing to do any predictions.

To answer you're question, yes Power Trip has always been this good. You were definitely missing out. Manifest Decimation fucking rips, and everything they've done since the song on the AHC comp has been fantastic. Although I do think Nightmare Logic is their best work so far.