That moment that we have been building up to for the past 12 months is here...my end of the year recap! 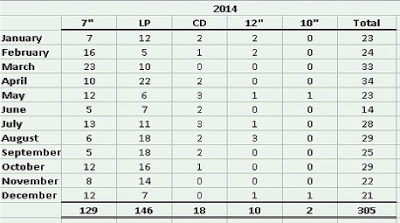 I love chasing down new music, and while a large part of my year was stuck in an 80's playlist, I still ended up buying 82 new releases in 2014. There are times when I wish that I could just ignore newer bands, and just concentrate on building my record collection of the older stuff that I know and love. At times, I would love to turn my back on what's happening today, and focus on acquiring more of those classic records...but in the end, that just isn't me. I love the chase of something new...that thrill of discovering a new band. Until that excitement is no longer there, I'll be keeping my ear to the ground...on the hunt for something new.

Still, I purchased 305 new records this past year, with only 40% of them being new releases. I think I'm making a good split in focusing on older and newer records.

Oh yeah, I also downloaded 106 other albums that were new to me...ummmm, yeah...I chase a lot of new music. Someday, I like to think that I'll get around to buying these too. 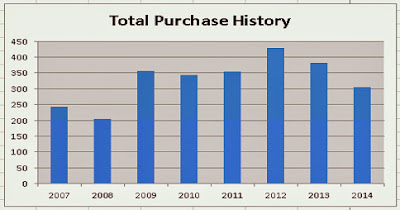 I made some solid efforts to control my spending this year. I'm not sure how successful I was, but my total numbers dropped quite a bit. In fact, I haven't seen numbers this low in the past five years. Man, it is heartbreaking trying to save money.

Still, let's not lose sight of the fact that I bought some great stuff over these past 12 months. Here are my top 5 pieces of vinyl that I bought.

1. Lights Out 'Overload' test press - I didn't expect to find this one, and I wasn't really looking. It was a surprise, and one that I wasn't going to pass up. This is one of my favorite Hardcore records from the past ten years, and I consider myself extremely lucky to own a test press.

2. Black Sabbath 'Paranoid' Vertigo first press - Easily the most money I've spent on a single record. Worth it for a legit first press with the Vertigo swirl labels, and the Jim Simpson/Big Bear credit on the gatefold cover.

3. Mos Generator 'Electric Nomads' - I fell hard for Mos Generator this year, and I was very happy to be given the chance to buy their this self released vinyl pressing containing some alternate takes and demo tracks. Nothing really earth shattering with the songs presented, although they are still very cool, but it was the handmade album covers with the personal touch that made this record really special.

5. Metal Church 'Metal Church' Ground Zero press - I think that what made this one so special was that I had no idea that it existed. Sure it would have been easy to find the major label pressing from Elektra, but once I discovered that the first Metal Church album saw an independent pressing on Ground Zero Records, I knew that was the way I had to go. It was like uncovering a piece of Metal history.

Creating my Top 10 list is a process that I work on all year. I'm constantly rearranging it, adding new releases, and moving records up and down on the list. It is exhausting and thankless work, but someone has to get this shit right, and I can't trust any of you shmoes with this responsibility. 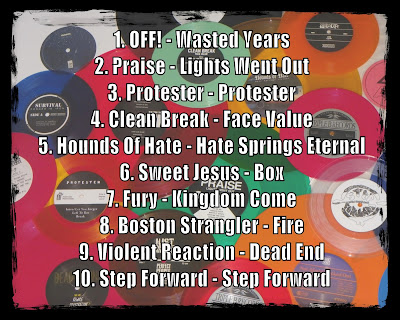 I'm going to be totally honest here, while there were some good Hardcore releases in 2014, a lot of the time I just couldn't be bothered to listen to them. While I recognize how great Praise and Sweet Jesus are, all I really wanted to do this year was listen to Black Sabbath.

Out of all the new Hardcore and Punk stuff I bought this year, OFF! was probably the only one that I reached for regularly, and for that, it gets the number one spot. 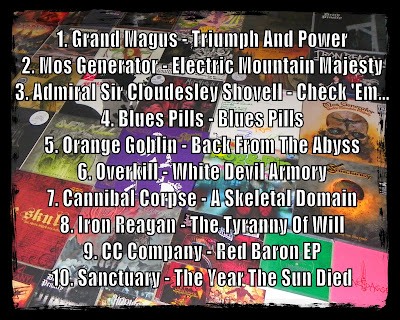 Since it was recorded back in '74, I couldn't justify considering it for this Top 10 list, but as an honorable mention, I will say that for a new release, the Queen 'Live at the Rainbow' album may have taken my number one spot. I'd never realized how good Queen were, and this record really opened my eyes. 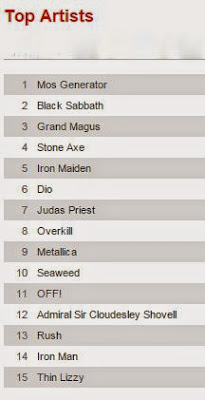 At the end of the year, I love checking my last.fm charts to see which bands came out on top. To see so much Metal and Rock on this list just verifies where my listening habits have been. Typically my charts are filled with bands that have had a new release, but this year, less than half of them did.

So there we have it. That was my year of record collecting. This blog has always been about me and what I buy. Things have changed since I started this blog eight years ago. There have been times when I was heavily into buying only Hardcore records, and this past year has seen a lot of Metal. I can't control the ebb and flow in my tastes, or what I'm passionate about buying. I have no idea where things will go in 2015, but if you have been sticking with this for any amount of time, and enjoying the ride, I thank you.

I think it is awesome for two guys who share the same brain that we came up with some radically different lists!
Good post. You spend way too much time on this shit!

As ever, great post. I always look forward to your end of year post, and this one did not disappoint.
Really surprised to see that OFF! LP at number one in your hardcore list. When I first saw that I was seriously puzzled.
Also funny to read that you were trying to save money. I can't imagine those Led Zeppelin or Queen box sets came cheap.
The best bit though was seeing Seaweed at number 10 in your top artists on last fm and knowing I put 'em there.

I haven't listened to that Protester 7 inch yet. That is about to change, I've heard nothing but great things.

Marcus, I use the term "save money" loosely. Ha! For me it makes more sense to buy a Led Zep box set that is very high quality, as opposed to say 8 more pieces of vinyl of Turnstile 7 inches (thanks for ruining that bit of fun, Reaper).