Tis The Season Of... Goatwhore

I've never really been into Death Metal. I'll eat a steady diet of Thrash, Doom, and Traditional Metal, but outside of the band Death, I've never been able to really get into this growling vocal style. Last year, I was in the mood for something a bit uglier than what I'd been listening to, and since the newest Cannibal Corpse album was getting high praise, I figured that I'd check it out. While I really liked it, I assumed that it would really be the only Cannibal Corpse album I'd ever need. When the band released their new album, A Skeletal Domain, this year, I couldn't resist checking out the zombie filled video for Kill Or Become. I absolutely loved it, and the album has raced up my Best of 2014 list. Surprisingly, I found myself in an unfamiliar position of needing more Death Metal, and I turned to my Metal brother, Doug, for help. 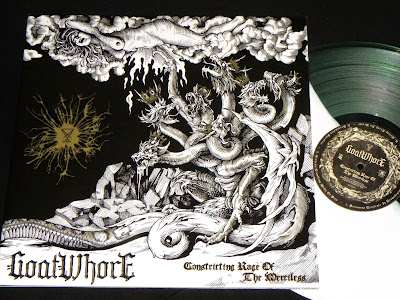 Doug soon directed me in the direction of Goatwhore, and I was sold on them within 10 seconds of the video for Baring Teeth For The Revolt. The pentagrams, the spiked forearm guards, and the roar from the vocalist (who reminds me of either early Sepultura or Celtic Frost)...oh, fuck yeah, I had no idea what I'd been missing. Goddamn, either that song or their song FBS are probably my favorite new songs at this point. Those riffs...Fucked. By. Satan! 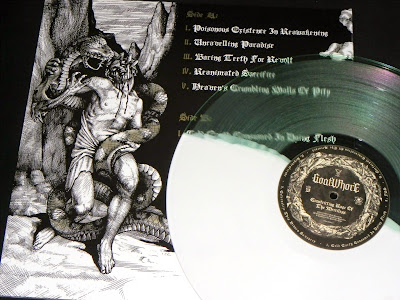 I was loving this album, and couldn't wait to pick up the colored vinyl from Metal Blade...and with the label having a sale on the Goatwhore vinyl, I'm just counting down the hours until I can head back to their store and buy another album.