I know that I've lost a little touch with what it hot and what's not in the Hardcore scene today. Still, the buzz around the Peacebreakers 7 inch was not lost on me. When I was in the Fun With Smack store picking up the new Boston Strangler record, I also dropped the Peacebreakers record in the cart and quickly checked out. 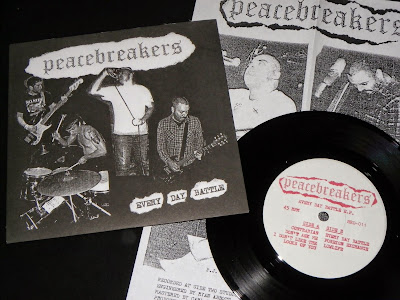 There are a couple of reasons for the notoriety behind the Peacebreakers record. First up, the band has three members from Boston Strangler, and with that alone, people are going to sit up and take notice. Second, there is a bit of controversy surrounding their song Foreign Exchange. With lyrics containing lines like "go back to where you came from" and "build a big wall, put up a fence, stop your kind from getting in", the song seems to have a strong anti-immigrant/racist vibe. Damn...the first time I read the lyrics I was extremely uncomfortable. I don't believe that shit attitude has any place in Hardcore. However, after scouring the internet for more info and background on this song, it seems that it is more about their attitude toward the horde of college kids that overrun Boston when school is in session. And since the insert lists photo credits to Martin Sorrondeguy from Los Crudos, I'm going to give the band the benefit of the doubt on this one. 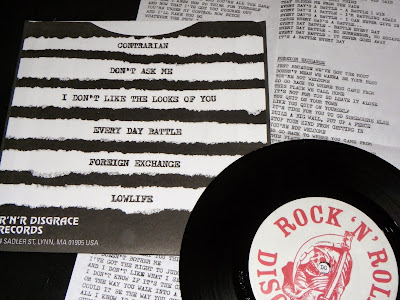 Man, this record is simply intense. Hard, fast and ugly. This shit just eats you up and spits you out. Great record.